This article addresses the deployment of a single Office Web Apps 2013 Server and subsequent integration with an existing Skype for Business (SfB) Server 2015 environment.  The environment and example steps outlined here are a continuation of a series of related articles covering the installation and configuration of a Standard Edition topology of Skype for Business Server 2015.

When testing various Skype for Business meeting modalities in the last article a specific feature was briefly mentioned which was not yet available: the ability to use the Present PowerPoint Files option from the Present menu.  This is because the deployed environment does not yet include an Office Web Apps Server which is required to support that functionality.  This server is not a SfB role but is actually part of the Office server family and is leveraged by Skype for Business as well as other Microsoft server products like Exchange and SharePoint.

It is important to be aware that once deployed this feature may still not function on any Skype for Business clients on workstations which are not joined to the same domain as the SfB deployment.  In these scenarios either server certificate revocation checking needs to be disabled on the workstations or the RootCA certificate configuration needs to be modified.  These concepts are addressed in this TechNet article.  (For this environment the later RootCA approach has already been addressed in the prerequisite statements defined in the first deployment article of the series.)

Note that the Office Web Apps (OWA) Server is also sometimes referred to as the “WAC Server” which is a carryover from the product’s pre-release name of Web App Companion Server.  Also be aware that this server role is completely separate from the Exchange Server web application entitled Outlook Web App which provides a browser-embedded client experience for access to Exchange email similar to the Outlook desktop client.

In the example Skype for Business environment this PowerPoint sharing functionality has not yet been introduced.  The steps in this first section show how to confirm that the feature is not yet available. 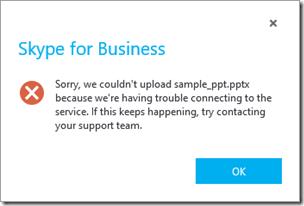 At this point it is evident that the environment is missing the required server role and configuration in order to support this feature.  The remainder of this article details the installation and integration steps required to add the desired functionality.

The remaining sections in this article are outlined in this diagram to show the general order of steps and visually represent which steps are performed on which platform.  For example orange indicates configuration steps completed on the OWA server where the blue is for steps performed on the SfB server.

As the Office Web Apps Server can not be collocated on any of the existing servers in the environment like a Domain Controller, Exchange Server, or Skype for Business Server then a separate, dedicated server needs to be deployed to host this role.

A new Windows Server 2012 R2 virtual machine was deployed and joined to the existing domain.  Alternatively both Windows Server 2008 R2 and 2012 are also supported server operating systems for this role if desired.  (The following steps are for Server 2012 R2, if a different server version is used then check this TechNet article for a list of different required components.)

Windows Server 2012 R2 will require that the .NET Framework version is upgraded to at least 4.5.2.  This can be accomplished  in one of two ways:

If the installation is successful  then the follow message should appear.

As outlined in this TechNet article Office Web Apps Server cannot be upgraded without losing some of its configuration data.  Thus it is recommended to disable any automatic updates on this server and configure them to require manual approval.  If a future Office Web Apps update is automatically installed via Windows Update it will most likely result in a broken server and PowerPoint presentations will no longer function for any SfB clients in the environment.

For this reason it is recommended to apply any newer Office Web Apps Server updates prior to the initial configuration.  When applying future updates to a functional, configured server make sure to follow the guidance in the TechNet article referenced in the previous paragraph which explains how to remove and recreate the server farm each time and update is applied.

The following historical table lists the more recent public updates for Office Web Apps. As these are service packs and cumulative updates then only the most recent update (highlighted in green) needs to be applied.  (A complete list of updates including minor hotfixes and security patches see this blog article.)

If for some reason the Office Web Apps server was installed with the RTM installation media then the SP1 update must be applied before installing the latest update.  As the SP1 media was used for this specific server installation then only the most recent July 2015 cumulative update needs to be installed on the server.

This step is optional and is only applicable if additional language support has also been configured on the Skype for Business Server.  If so then this package adds support for other languages to shared PowerPoint presentations.

While the previous steps where basically just collecting and installing downloaded software this section will cover the configuration of the Office Web Apps Server.  Once this is completed the next section will address configuration on the Skype for Business side to complete the integration.

Note that this article deals with an internal-only lab environment and thus any External configuration is not covered.  In a potential future article when a Skype for Business Edge Server is introduced and thus a reverse proxy solution is needed then this configuration will be revisited to provide for external access.  As this server handles only HTTPS (TCP 443) requests then it is not a role that is handled by the Edge Server, but must be published through a supported reverse proxy model in the same way that the SfB Front End server web services will be.

Before creating the new Office Web Apps farm a new server certificate will need to be requested and issued to the server to support HTTPS connections required by the Skype for Business clients and servers.  For environments with an AD-integrated Certificate Authority (CA) this process can easily be performed from the domain-joined OWA server using the steps shown below.  In environments leveraging a third-party CA for certificates then an offline request may need to be issued, which is covered in this older article. 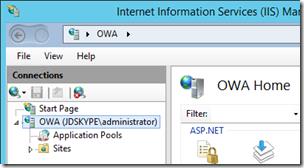 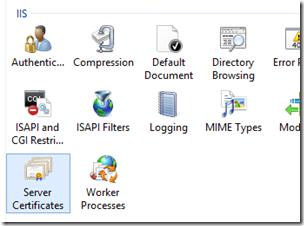 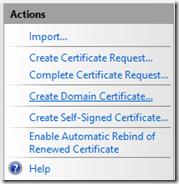 This previous step is critical as the next section will utilize the certificate’s Friendly Name name to assign it to a new Office Web Apps farm.  Because Widows Server does not prevent multiple certificates on the same server from having the same friendly name this could cause problems with the OWA server configuration.  Make sure that the Friendly Name entered above is unique from any other server certificates which might already be assigned to the server.  Note that the Friendly Name field on a certificate is not actually part of the signed information and can be changed anytime, so there is no need to request a new certificate if this were to occur.  Simply rename one of the conflicting certificates to resolve this.

Completing the previous step will process the request, immediately issue it to the online CA, and then import the returned, signed certificate into the local server.  The new certificate should be listed under the Server Certificates panel as shown below.

There is no user interface tool for managing the Office Web Apps server and thus all configuration is performed using the PowerShell cmdlets which were automatically added during the earlier server installation. 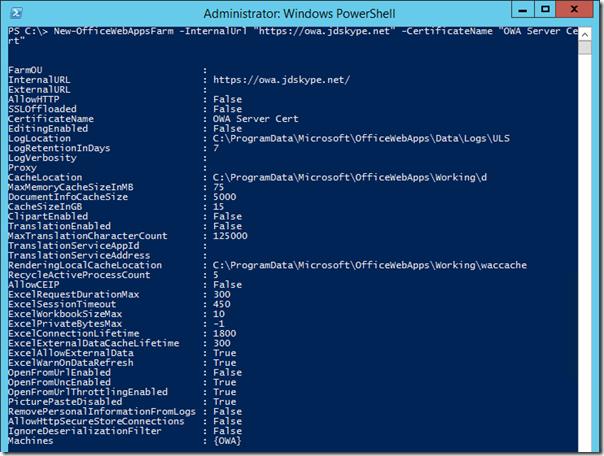 Note that by assigning a certificate during the creation of the server farm that unencrypted HTTP access is not allowed and only encrypted HTTPS access is supported.  This is the correct setup for integration with Skype for Business Server.

Now that the Office Web Apps server appears to be functional then the final configuration step is to integrate it with Skype for Business Server 2015.

The configuration in SfB is as simple as telling the server where to find the newly deployed Office Web Apps server; there is no additional configuration required.

If the OWA server is not deployed in an internally-routable network to the SfB Front End server then click the checkbox in this window.  In this environment the servers are all located in the same LAN so it is left unchecked.

Before testing the integration the SfB server log can be checked to make sure that the OWA server has been discovered and enabled in the environment.

Looking at the most recent log entries the following two Information events should be logged shortly after publishing the changes to the SfB topology.

In the event that the deployment was not successful then a different error message may appear.  The most common is Event ID 41033 which reports a problem with the discovery process.

Depending on the data returned in the event above this could point to a couple different possibilities.

With the topology published the final step is to repeat the same test that was performed at the onset of this article.

If this client was already signed-in during the deployment then make sure to sign out and back in to receive the latest SfB provisioning settings from the server which reflect the changes. 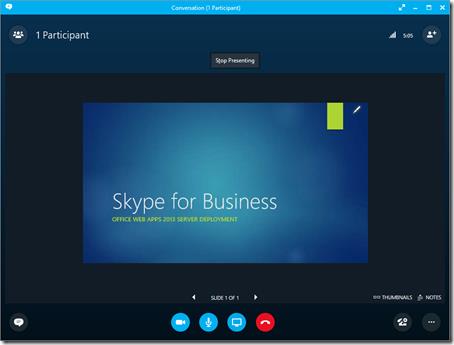 This concludes the deployment of a single Office Web Apps Server into the environment.  More Skype for Business 2015 Server deployment articles like this one can always be found in this updated list, which will include an upcoming article on Exchange Server integration.

Filed under Skype for Business · Tagged with 2015, Deployment