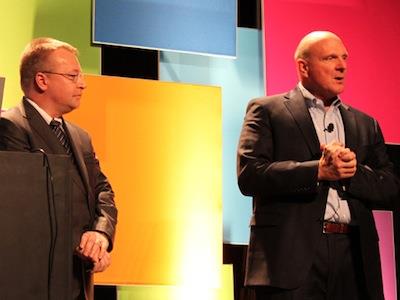 Nokia partners with StarHub for IoT services in Singapore

It appears as though there’s another new problem for Microsoft and Nokia’s smartphone partnership.

The second big news that came from the Shareholders’ Meeting is the issue about Skype. Elop was asked by a shareholder “Nokia seems to be having a problem with the distribution channel due to Skype” asking how will Nokia deal with this problem. Elop answered “If the operator doesn’t want us, it doesn’t want us. We will appeal to them with other arguments. We have more to offer to them. It is a good point to start the discussion from Skype.” (source HS website. Text in Finnish, translation is mine).UPDATE May 4 – again our reader Asko who says he was personally present at that meeting, adds that Elop had explained, that Nokia, together with Microsoft, is now attempting to convince carriers/operators to accept Skype against their wills, by marketing/pricing/sales gimmicks. This admission says to me, that the carriers are truly hostile towards Nokia about the matter and this negotiation attempt is futile.Nonetheless, Elop clearly admits that there is a reseller problem relating explicitly to Skype. He furthermore admits, the Skype issue has resulted in some carriers actually refusing to carry Lumia. (Read the full thing here >)

When Steve Ballmer and Stephen Elop announced their partnership, one of the big lines Ballmer repeated over and over again was, “operator friendly.” It looks like Microsoft can’t be “operator friendly” and push Skype, which it bought for $8.5 billion last year.

It’s important to note that the Lumia doesn’t have Skype pre-installed yet. But just the fact that Microsoft owns Skype, and Nokia is so closely aligned with Microsoft appears to be affecting Nokia handset sales.

In Windows Phone 8, Microsoft will be pre-installing Skype. We’ll see if it really has an affect on carrier relations then or not.

*UPDATE: Nokia says Ahonen is fudging the truth. Here is the complete transcript, according to Nokia:

Stephen Elop: So, thank you for your question about Skype. Indeed, Microsoft did buy the Skype company as part of the ecosystem that comes with Windows Phone and Windows and so forth, so that’s quite correct. The feedback from operators is they don’t like Skype, of course, because for those operators who have a traditional wire-line business, traditional telephone business, it could take away from revenues.

And, so what MSFT has done – and we’ve been part of these conversations as well with operators – is as you correctly say, if operator doesn’t want Skype installed on a Windows Phone from Nokia or any other company, then the operator can make that decision.

Now, you’re right: it can be circumvented. But of course it’s on all Android devices, it’s on iPhone devices, it’s on iPad, it’s on all of those devices. So in fact what we’re doing with the operators is turning it around into an advantage. Instead of them just complaining about Skype on Android or Skype on iPhone, with Microsoft and Nokia, we can have a conversation that says “ok there, is this Skype thing, is there a different type of partnership we can do that recognizes that voice over IP like Skype is coming no matter what, but maybe we can do something creative that generates incremental revenue for you.” Some operators are looking at bundling Lumia, Skype and their own services with higher-bandwidth allotments to actually charge the consumer more and generate more revenue for them. So by actually controlling the Skype asset, we can begin a conversation about how we can have a better Skype-based relationship, which was impossible for operators to do before. So it’s actually quite a bit more advanced than whether operators like or don’t like Skype; they actually want to engage in a conversation about what does this mean and how could we do something that we couldn’t do before. Thank you.