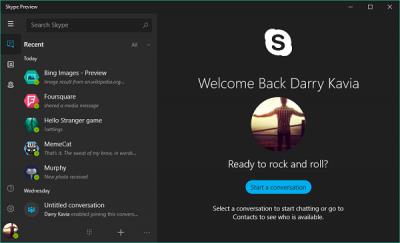 Microsoft had rolled out the Anniversary Update for Windows 10 last week and with it, many of the native apps for Windows got a complete makeover. Skype is one of the apps which got totally transformed and a revamped preview version was pushed out as a part of the update. Skype has seen many modifications and improvements since the last big update of Windows 10. In this post, we will be taking a look at all that has changed in Skype for Windows 10 Anniversary Update.

Tying it more closely with the UWP principles, Microsoft has developed the new version of Skype from the ground up to deliver a smooth and standard Windows 10 experience. If you’ve already upgraded your PC to Anniversary Update, you can lay your hands on the new Skype Preview app right away. Let’s head on to explore what all new things are included in this version of Skype.

Skype Preview for Windows 10 is all familiar but just a notch better. You can use all your favorite Skype features like one-on-one or group chat with your friends, group video calls with your team and low rate international mobile and landline calls. Available for every major platform out there, Skype empowers you to stay connected with anyone who matters to you. Below are some salient features of the newly designed app for Windows 10 devices:

Those who like dark mode in Windows 10 would be happy to know that Skype is all freshened up with an elegant dark interface which makes it look amazing. Apart from being just eye-catching, it is fast and loads real quick. Nevertheless, you can switch to the light theme from the app settings if you are not much of a fan.

Microsoft has been encouraging this feature for most of the communication apps developed using UWP guidelines. Incorporating the same in Skype, it enables you to reply to messages directly from the notification without even having to open the app.

Earlier this year at annual Build conference, Microsoft announced Skype Bots, a revolutionary paradigm shift for various businesses to interact with general consumers. You can add various bots that are currently available for Skype. Some of them are quite fun to chat with. Additionally, several brands like Foursquare, Getty Images and IFTTT has released their own bots to interact with app users. 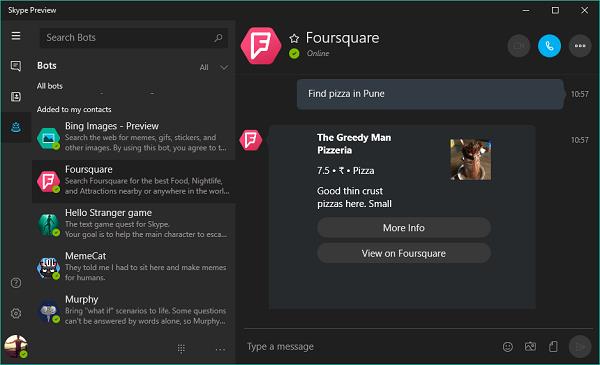 Skype Preview has been totally re-imagined bringing out the best of UWP features. If you’ve been using Skype video and messaging apps released for the previous version of Windows, those will be replaced by Skype Preview app. We are yet to see many more improvements in the app as this is just a preview version of what Microsoft has in store for us.