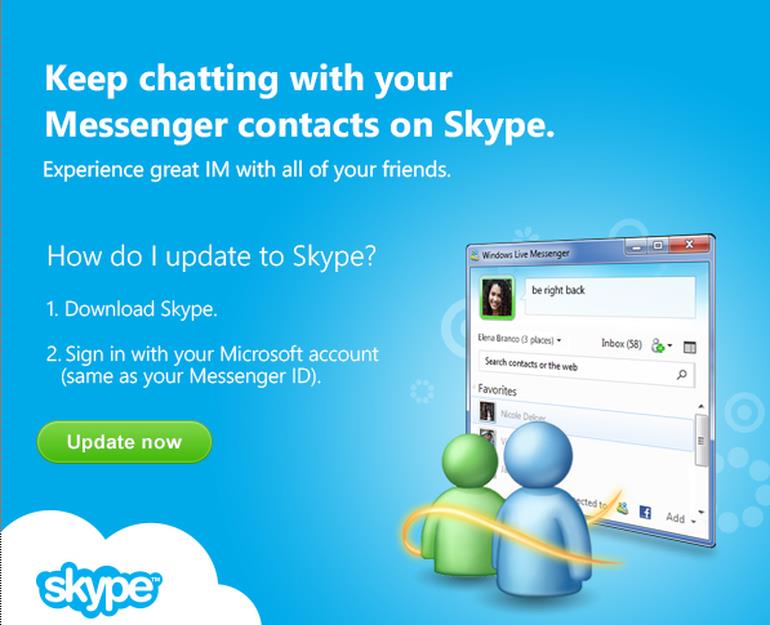 Microsoft is moving ahead with its aggressive plans to move users on its Messenger instant-messaging service to Skype.

Late last year, officials said to expect Microsoft to retire Messenger in all countries in the first quarter of 2013 with the exception of mainland China. The new timetable is slightly lengthier, but not much.

Officials are now saying they plan to discontinue Messenger for a “test group” comprising about one percent of the installed base of “tens of millions” on March 15 . Starting April 8, Microsoft will begin phasing out Messenger for the remaining users, starting with those in English-speaking countries, and ending with Portuguese (for some unspecified reason). The entire “retirement” should be completed by April 30 or so.

(An aside: Those using Skype on Mac clients,  Windows 8/Windows RT clients  and Windows Phone 8 already can sign in today with their Messenger/Microsoft IDs. In case you’re wondering when Microsoft will update the WP8 Skype beta and/or move to a final version, company officials are not saying. I asked.)

If you’re like me and not so keen on the Messenger-to-Skype move, you can keep using Messenger until Microsoft shuts you off from the service, sometime between March 15 and April 30 or so. Once that happens, you won’t be able to sign into Messenger any longer.

If you’re using Messenger via a third-party instant messaging service — like Trillian, Digsby, Pidgin or IM++, for example — you will have a somewhat longer reprieve from being shut off.

“Third-party APIs (application programming intefaces) will eventually be shut down,” Munsell said. Each third-party service has its own timetable for doing this, which Munsell said would be up to them to announce. While this won’t happen as quickly as Microsoft’s own Messenger phase-out, users shouldn’t expect Mesenger to be supported through these services for the long-term.

As to why I’m not so keen on this move, it’s not because I’m afraid of using something different or new. While Munsell noted that the Skype team is aware there’s a learning curve for those accustomed to Messenger who will be moving to Skype, I don’t think it’s all that substantial. A few of my contacts already have moved off Messenger to Skype and the transition has not been smooth. They often don’t receive IMs I’ve sent them at all, in spite of Skype IM indicating that all is fine. Some have found managing multiple conversations simultaneously to be a chore compared to how this works with Messenger today.

Munsell said Microsoft has not seen anything indicating there will be widespread problems. “We don’t see anything on any scale of concern to us,” he said when I asked.

Microsoft/Skype’s message is users will gain new capabilities by moving from Messenger to Skype. Among these, Munsell said, are the ability to edit and delete messages, and the ability to move seamlessly from IM to Skype audio/video.

I’m curious if others who’ve already moved off Messenger to Skype have hit any roadblocks — or found any new capabilities worth writing home about. Readers?