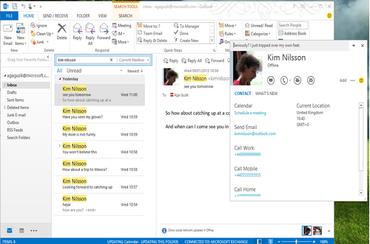 Microsoft’s Skype division rolled out a new version of Skype for Windows (version 6.1) on January 10.

The updated version is for PCs running 32- and 64-bit versions of Windows XP, Vista and Windows 7. (This is not an update for Skype for Windows 8, but since users can run Skype in the Desktop on Windows 8, they can run this update that way if they want.)

The 6.1 update allows users to call and chat with contacts directly from Microsoft Outlook; search and add contacts more easily; and manage accounts from a new profile page, according to officials.

The 6.1 update also includes a number of bug fixes. Here’s Microsoft’s chart that lists the 6.1 fixes:

I noticed when I just updated and installed this version a note that said future Skype updates may silently install with “future updates.” I don’t know if this is new. (Anyone?)

Microsoft officials sent notes to some Live Messenger users this week to remind them that Microsoft is planning to pull the plug on its Live Messenger service and replace it with Skype (which includes built-in messaging). The date when this will happen, according to those who received the email, is March 15. I, myself, never got the email even though I still am an active Live Messenger user. Not sure where in the ether (or spam folders) it may have ended up.

In preparation for the discontinuation of Live Messenger and replacement by Skype, Microsoft is prompting Live Messenger users to merge their contact lists. Once a user does this s/he is moved automatically to Skype and cannot use Messenger any longer — at least not without a lot of support intervention on Microsoft/Skype’s part. Users who accidentally or intentionally merge their contacts now may benefit from using Compact View in Skype when messaging their contacts, as WinSupersite’s Paul Thurrott noted.

Microsoft’s Skype unit also updated Skype for Mac to version 6.1 on January 10. The Mac update allows Skype users to dial numbers from Safari on Mac, and adds an improved user-profile view, according to a blog post detailing the update.