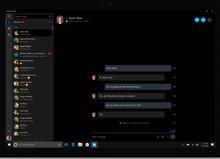 The updated Skype client has a new look and feel, using more colors, gradients, bold type and “squiggles” (signs of activity). Incorporation of bots and add-ins are front and center in the new design. Users can add stickers, watch movie clips, and play games from inside the new client.

The Skype messaging everywhere (SMS Relay) feature is slowly but surely moving ahead, and not just for Windows or Skype Insiders only.

A year ago, Microsoft officials said the company was nearly done moving its Skype consumer service from its P2P backbone to Azure.

Up until today, Microsoft had not talked about its plans to modernize the Skype UI as part of Skype overhaul. But 200,000 Skype Insiders, the majority of which are on Android, have been testing the new client for the past three months.

Microsoft’s plan is to take about four weeks to roll out the updated Skype consumer client to Android users, then roll out the new client to iOS users. This Summer, Microsoft plans to release a preview of the new client for Windows 10, Mac, Linux, the web, and Xbox One. Raghav said the desktop version of the client won’t simply be a bigger version of the mobile client; it will be customized for desktop use.