This section of the City and County of San Francisco’s (the City) Comprehensive Annual Financial Report presents a narrative overview and analysis of the financial activities of the City for the fiscal year ended June 30, 2001. We encourage readers to consider the information presented here in conjunction with additional information that we have furnished in our letter of transmittal.

OVERVIEW OF THE FINANCIAL STATEMENTS

The statement of net assets presents information on all of the City’s assets and liabilities, with the difference between the two reported as net assets. Over time, increases or decreases in net assets may serve as a useful indicator of whether or not the financial position of the City is improving or deteriorating.

Both of the government-wide financial statements distinguish functions of the City that are principally supported by taxes and intergovernmental revenues (governmental activities) from other functions that are intended to recover all or a significant portion of their costs through user fees and charges (business-type activities). The governmental activities of the City include public protection, public works, transportation and commerce, human welfare and neighborhood development, community health, culture and recreation, general administration and finance, and general city responsibilities. The business-type activities of the City include an airport, port, public transit system, water and power operations, an acute care hospital, a long-term care hospital, sewer operations, and various parking facilities.

Fiduciary funds. Fiduciary funds are used to account for resources held for the benefit of parties outside the City. The City employees’ pension and health plans, the external portion of the Treasurer’s Office investment pool, and the agency funds are reported under the fiduciary funds. Since the resources of these funds are not available to support the City’s own programs, they are not reflected in the government-wide financial statements. The accounting used for fiduciary funds is much like that used for proprietary funds.

Notes to the Financial Statements 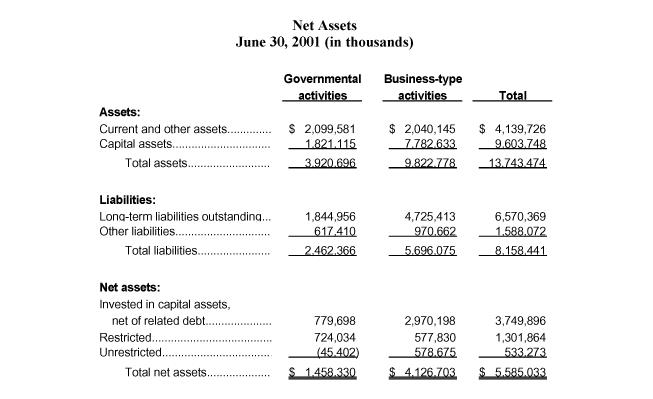 As noted earlier, net assets may serve as a useful indicator of a government’s financial position. For the City, assets exceeded liabilities by $5.59 billion at the close of the current fiscal year.

An additional portion of the City’s net assets, $1.30 billion (23 percent) represents resources that are subject to external restrictions on how they may be used. The remaining balance of unrestricted net assets, $533.3 million (10 percent) may be used to meet the government’s ongoing obligations to citizens and creditors. 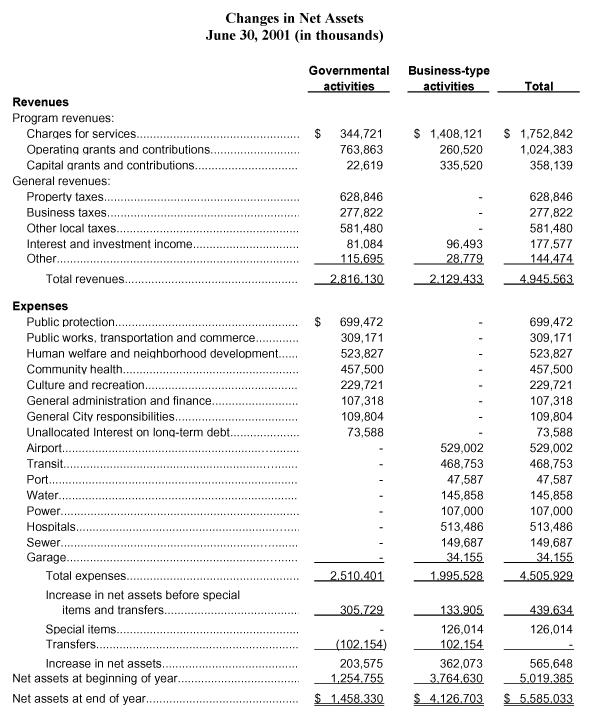 The City’s net assets overall increased by $565.6 million during the current fiscal year. These increases are explained in the government and business-type activities discussion below, and are primarily a result of revenues increasing faster than ongoing expenses.

The charts above illustrate the City’s governmental expenses and revenues by function, and its revenues by source. As shown, public protection is the largest function in expense (27.9 percent), followed by human welfare and neighborhood development (20.9 percent) and community health (18.2 percent). General revenues such as property, business, and sales taxes are not shown by program, but are effectively used to support program activities citywide. For governmental activities overall, without regard to program, operating grants and contributions are the largest single source of funds (27.1 percent), followed by property taxes (22.3 percent) and other local taxes (20.6 percent). As with the statement of net assets and the statement of activities, because the GASB No. 34 reporting model significantly changes the form of financial data, the City has not restated prior fiscal year revenue and expenditure information. Year to year comparisons will be included in future reports.

FINANCIAL ANALYSIS OF THE CITY’S FUNDS

As of the end of the current fiscal year, the City’s governmental funds reported combined ending fund balances of $1.49 billion, an increase of $309.3 million in comparison with the prior year. Approximately $277.2 million of this total amount constitutes unreserved fund balance, which is available for spending at the City’s discretion. The remainder of fund balance is reserved to indicate that it is not available for new spending because it has already been committed, (1) to liquidate existing contracts and purchase orders ($410.8 million), (2) to fund continued programs or projects in future fiscal periods ($586 million), (3) to pay debt service ($63.3 million), and (4) for a variety of other restricted purposes ($155.1 million).

Differences between the final budget and the actual (budgetary basis) resulted in a $97.9 million decrease in total charges to appropriations. This is primarily due to the following factors:

During the year, actual revenues and other resources exceeded budgetary estimates by $101 million. The majority of this amount is attributable to local taxes–specifically the property, sales, hotel, and utility taxes where actual performance was greater than estimates. The City also started the fiscal year with an available fund balance approximately $21 million greater than anticipated when the fiscal year 2001 final budget was developed. The net effect of the under-utilization of appropriations and the receipt of actual revenues greater than estimates resulted in a positive budgetary fund balance of $199 million.

The City’s capital assets for its governmental and business type activities as of June 30, 2001, amount to $9.6 billion (net of accumulated depreciation). Capital assets include land, buildings and improvements, machinery and equipment, park facilities, roads, streets, and bridges. The total increase in the City’s capital assets for the current fiscal year was 10.33 percent (a 1.61 percent increase for governmental activities and a 8.72 percent increase for business-type activities) as shown in the table below.

For governmental activities, no major net infrastructure assets are reported at the beginning of the year because the historical costs did not meet the threshold established in GASB 34. In fiscal year 2001, ongoing infrastructure projects are accounted for in construction in progress.

The City’s ratings on uninsured general obligation bonds as of June 30, 2001 were:

The City’s enterprise activities have experienced some changes in debt ratings since June 30, 2001. On July 9, 2001, the Water Department’s underlying rating on outstanding debt was downgraded by Standard & Poor’s from AA- negative outlook to A+ stable outlook, affecting approximately $233 million of uninsured Water Department debt. Following the events of September 11th, Standard & Poor’s placed all its North American airport and airport-related facilities, including the San Francisco International Airport, on CreditWatch with negative implications. Moody’s Investors Service affirmed its A1 rating for the Airport, but revised the outlook from developing to negative, and Fitch ICBA, Inc. affirmed its AA- rating for the Airport, but revised the outlook from evolving to negative.

Since the close of the 2001 fiscal year, the City has issued additional debt of $488.5 million in Airport Revenue bonds, $50.8 million of subordinated commercial paper notes, $140 million of Water Revenue bonds, $60.8 million in Settlement Obligation Bonds for business tax obligations related to litigation against the City, $17.7 million in General Obligation bonds to finance improvements and construction of branch library facilities, and $52.7 million in Certificates of Participation and Refunding Certificates of Participation related to the financing of City office buildings.

Economic factors and next year’s budget and rates