During a Lync 2013 deployment, a Lync 2013 Front End service could fail for a number of different reasons. I’ve noticed that there’s quite a bit of confusion as to why this failure occurs and what to do when it happens. So, I’ll first share some common failure scenarios so that you can avoid them. I’ll then discuss what you need to know and what you need to do if the Front End service fails. That way, you can be better prepared and feel more comfortable restarting it.

Another situation is if you lose all your Front End Servers (let’s say three again) at the same time because of an event such as a power outage. In this case, you’ll likely lose quorum for your Lync 2013 pool, causing the Front End service to fail. (To find out more about quorums and how to keep them going, see my article “Microsoft Lync Server 2013 Front End Maintenance.”)

As you can see, these scenarios aren’t far-fetched. They could happen, so you need to be prepared.

What You Need to Know

If you find that your Lync 2013 pool is inoperable because the Front End service has stopped, you need to get out of that predicament as quickly as possible. Before I show you how to do so, though, you need to be familiar with several Windows PowerShell cmdlets in the Lync Server Management Shell.

Using the PowerShell cmdlets just discussed, let’s explore how to restart a Front End service that has failed. The first thing you need to do is determine the current state of the Lync Front End pool. To do so, you can run the Get-CsPoolFabricState cmdlet. As Figure 1 shows, you’ll get a good idea of the pool’s current state, what nodes need to be rebooted, and the order in which they need to be booted. 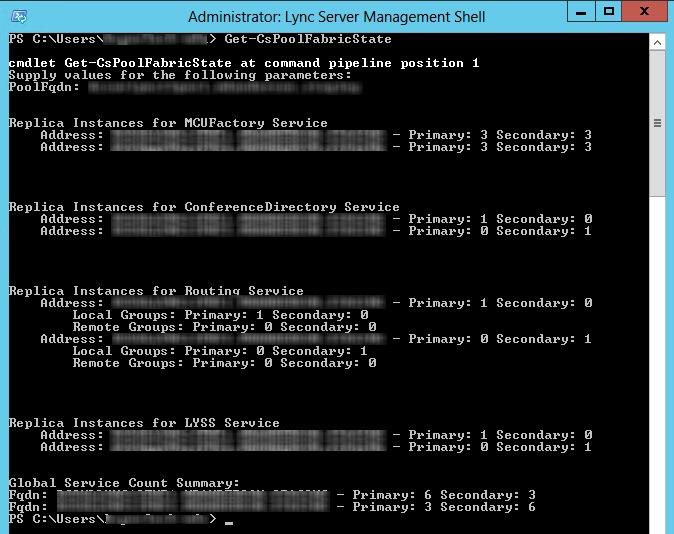 Based on what you discover about the Front End pool’s state, let’s say you decide the best action is to stop, then restart all the Lync-related services for the pool by using the Reset-CsPoolRegistrarState cmdlet with the -PoolFqdn parameter. Without adding any additional syntax, the cmdlet will display the options shown in Figure 2.

Let’s say after discovering the state of the Front End pool in Figure 1, you decide there needs to be a more stringent reset done to the Lync quorum, so you run the Reset-CsPoolRegistrarState cmdlet with the -PoolFqdn and -ResetType FullReset parameters, as shown in Figure 4. When you run this command, PowerShell will perform a full reset of the pool, which ultimately rebuilds the local Lync Server databases that are located on the Front End Servers.

There will be times during a deployment when you publish too many Front End Servers at the same time or when you reboot too many servers concurrently during maintenance. These accidents don’t have to spell disaster for Lync 2013. By becoming familiar with how to use the PowerShell cmdlets I discussed, you can be better prepared and feel more comfortable restarting the Front End service if it fails.