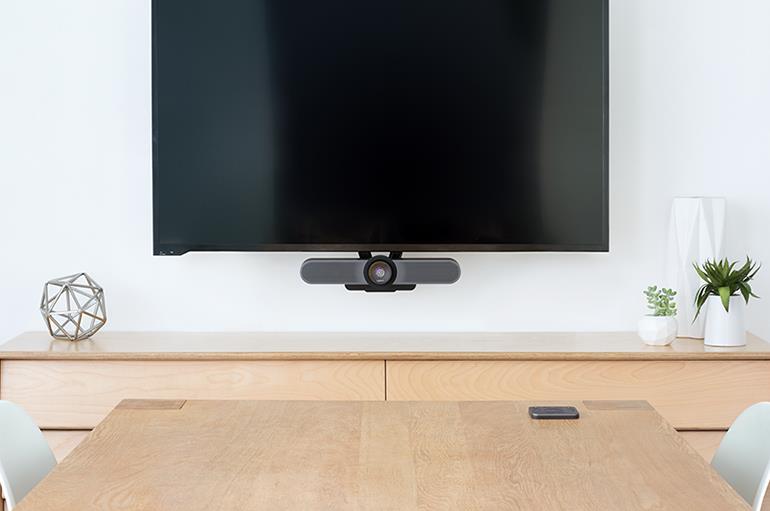 Logitech may still be best known for mice, keyboards and webcams, but over the past few years the company’s business group has steadily built a portfolio of PC-based video conferencing endpoints. These range from the £249.99 BCC950, designed for groups of up to 4 people, to the GROUP, which services meeting rooms with up to 20 people and starts at £999. In the middle, until now, has been the distinctively cylindrical Connect, a portable unit designed for ‘huddle rooms’ with a capacity of around 6 people and costing £449.99.

The remote control unit is bundled with MeetUp.

The optional expansion mic allows MeetUp to handle meeting rooms with up to 8 people.

The MeetUp looks very different from its huddle-room stablemate, resembling a BRIO-style webcam on steroids rather an Amazon Echo. MeetUp’s key spec is its 4K UltraHD camera with 5x HD zoom, which has a 120-degree field of view (FoV) — by comparison, the Connect only offers full HD and a 90-degree FoV. MeetUp goes even further, supporting up to 175 degrees via its motorised pan/tilt mechanism, operated by the redesigned square remote control unit. MeetUp also offers enhanced audio, optimised for huddle-room-sized spaces, and three omnidirectional echo-cancelling, noise-reducing mics.

Another MeetUp differentiator is the availability of an optional £229 expansion mic, which extends the device’s range, allowing it to service meeting rooms with up to 8 people. Another (free) option is an app, available in July for Android and iOS devices, that turns your smartphone into a remote control.

As with other Logitech conference cameras, no software is supplied: instead, MeetUp is certified for Microsoft’s Skype for Business, is Cisco-compatible and integrates with Logitech Collaboration Program members.