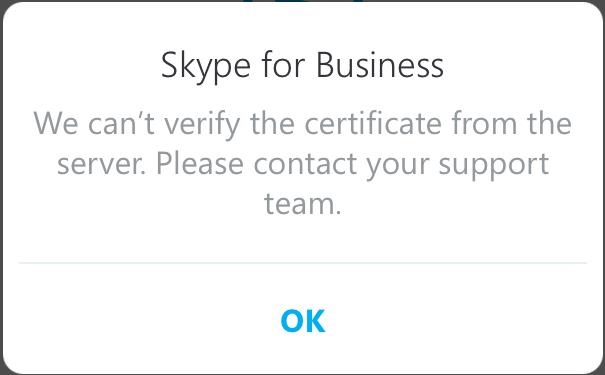 We had a customer call in the other day. He had an older iPhone (4S, iOS 8) and still used Lync Mobile for iOS. Now, it worked fine when he was on the go (which he was much of the time). But when he tried to log in while in the office, he sees a sign-in error:

One of our Support Engineers went on-site with his iPhone 6 (iOS 9), running Skype for Business for iOS. He tried to connect to their server—and saw the same kind of error!

The Problem: iOS Looks at Internal Certificates and Says “Huh?”

We encountered this error ourselves. Internally, just after building our Lync Server 2013 instance. It’s an issue with the device and Lync/Skype for Business’ internal certificates.

After version 5.4 of the Lync Mobile iOS client, iOS began having trouble verifying certificate authenticity. It appears to happen much more on internal certificates than externals. As far as we can tell, there is no single cause we can point to.

Even Microsoft isn’t sure. On both of the KB pages mentioning this error:

They say, “The cause of each message is slightly different, but both errors are caused by the inability to verify the authenticity of a certificate or certification authority.”

Tom Talks UC also talks about it, with a little more detail, but no definite cause. Which is okay—he gets to the important point fast. How to fix it.

How to Install a Root Certificate on iPhone

First, verify you have a trusted root CA (certification authority) installed. Likely you installed this during Skype for Business setup, and it’s fine, but it never hurts to check.

(Reference on certificates during Skype4B Server setup: Install Skype for Business Server 2015 on servers in the topology – TechNet)

The solution to the internal cert error is simple: Install your Root CA certificate on the iPhone.

Which method you use depends on your network setup. We used email, as the customer in question didn’t use Apple Configurator and email was a fast (and successful) way to test.