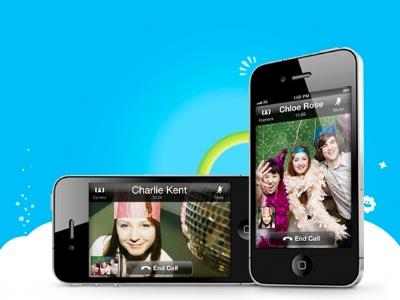 Finally! You can now make video calls with your iPhone 4 over a wireless network with ease.

You can also receive video calls if you have an iPad or older iPhone or iPod without a front-facing camera. And like previous versions of the app, you can still make calls to desktops running Skype.

To sweeten the deal, Skype’s update lets you make video calls over 3G, instead of tethering you to wifi like Apple’s FaceTime. Pretty neat if you’re traveling somewhere and want to beam live video to someone else at home.

One caveat though: 9 to 5 Mac says it uses 3.4 mb of data per minute. So if you have a limited data plan, you don’t want to go crazy with the Skype chat over 3G.

With more than 25 million people using Skype on a variety of different devices (not just those made by Apple), you can be sure you’ll get more use out of it.

We tested the app this morning and it worked great. Video quality was just as good if not better than Apple’s Facetime, even over 3G. If Apple doesn’t start opening Facetime to other devices or allow 3G calling, Skype has the potential to become the go-to video chat app.

If you don’t already have Skype for iPhone, you can download it here.