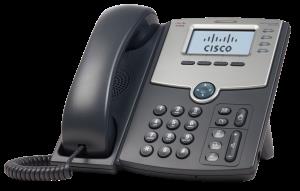 Having more than one phone number often makes sense, just like some people have one email address for business and another for personal communications. When it comes to a work-life balance, having separate work and business numbers (each with its own voice mail) is an easy way to let work-related calls after 6PM go directly to voice mail, and similarly defer personal calls during working hours. Also, it can help simplify accounting and billing.

The question is: can mobile users get an additional phone number to create the effect of two phone lines on one device?

The answer: Yes, you certainly can.

The cost can range anywhere from free to $25 a month and up, depending on what you want, and possibly, how many calls you make.

This article looks at some of the services that will give you a “phone number,” meaning it can be called from any phone or smartphone, without the need for another app or account just to reach it, although some services may require an app or access to a web site in order to answer the calls.

Unless explicitly noted, none of these services require any new hardware, though they may require an app or other software.

(Important reminder: these services may not be good for making 911 or other emergency calls.)

Because most, if not all, of these additional-number services use the Internet, they may offer other advantages such as:

And for any small business, particularly a “distributed” one with remote employees, you may want a main phone number for your business that can act like a “PBX (private branch exchange) in the cloud,” allowing callers to select and get routed to the right person.

Additional Numbers From Your Carrier

Back in the (analog) day, AT&T and other carriers could actually route more than one phone number to a phone line, each with a “Distinctive Ring” associated with it. However, all out-going calls showed up on Caller ID as coming from the primary number.

This is still available; for example, Verizon FiOS supports up to five Virtual Telephone Numbers, but distinctive rings are no longer available to new customers. Talk to your carrier to explore your options. 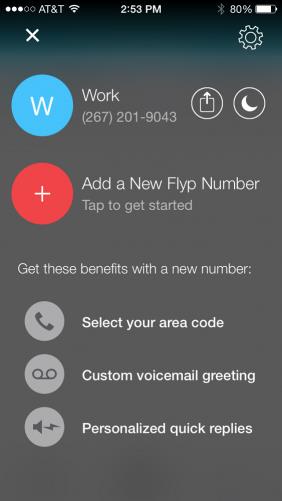 Available for iOS or Android smartphones, Flyp lets you add up to six different phone numbers on a single smartphone. Cost ranges from zero to $29.99 per year. The first phone number comes free, but you can also add an additional five at a cost of $2.99 per month for every additional number – or at a yearly discounted premium of $29.99.

Especially useful for professionals with more than a few irons in the fire, Flyp gives you the opportunity to juggle your numerous endeavors without getting your lines crossed. Numbers can be used for any mix-and-match variety of purposes, like a general business line for standard inquiries and a separate number for work associates to call you directly.

In addition to separate phone numbers, the Flyp app also manages voicemail, texts and other notifications. Flyp also offers you the ability to set up custom area codes for each individual number, which can make it easier for contacts in certain parts of the country to reach you without having to dial long distance.

Interested in having six new numbers? Read our Flyp review.

Google Voice is a PBX-like front-end service which includes a phone number (either a new one or an existing mobile number) that can route calls to one or multiple phone numbers including a home, office, cell, or VoIP phone. When somebody calls a Google Voice number, Google rings all the phone numbers at the same time until you pick up on one of the devices, or it goes to voicemail.

Google Voice features include online voicemail, auto-transcription of voice messages to email, and inexpensive calling (free within the United States). One useful feature lets you listen to a message as the caller is leaving it. (Some features do require you to have “ported” your mobile phone number to be your Google Voice number.) If you have a Google number, Google’s Mobile Voice app shows the Google number as the phone number you’re calling from.

If you don’t want customers or business partners to have to keep track of several phone numbers to reach you, Google Voice is a good choice. Google offers mobile apps for Android and iOS. Except for calling outside the United States, Google Voice is free.

Read our Google Voice review to learn how well it works with business.

Grasshopper is a “virtual PBX” for managing and routing your incoming calls and is ideal for entrepreneurs, startups, mobile organizations and small businesses. 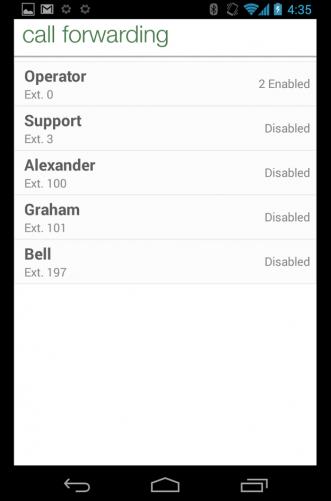 There’s no hardware or software; when someone calls a Grasshopper phone number, it auto-answers, lets the caller select who they want to talk to (“Press 1 for Sales, 2 for Support, 3 for our Buzz guy…”), and routes the call to the correct person.

Grasshopper is for in-bound calls; there’s no “dial tone” for making outgoing calls. If you want to call somebody and have the recipient’s caller ID see your Grasshopper number, you’ll need to use Grasshopper’s mobile app.

Grasshopper offers the kind of features expected from a business-oriented phone system. In addition to a local or toll-free phone number, Grasshopper has a “main greeting” (which can be customized for a modest price). Other features include call hold/transfer/conference, conference calling, voice mail transcribe-to-text, and Call-Announce, which has the caller record their name so you can hear who is calling.

Grasshopper is a good choice for small companies, since it uses one main number, rather than a list of employee’s home or cell phone numbers, and makes it easy to manage an employee phone directory.

Plans start at $12 per month, plus per-minute call usage, for a phone number and a raft of features.

Learn more about this popular business phone service in our Grasshopper review. 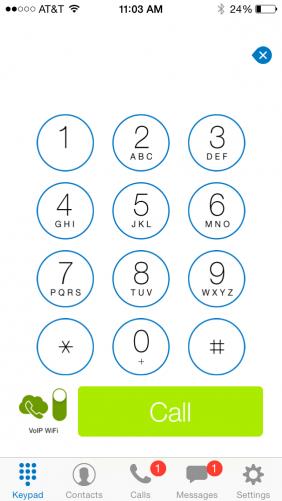 Line2 allows for a second phone number that lets you send and receive calls on a compatible device like a smartphone, tablet or computer. You can install Line2 on multiple devices, although only one device can use a Line2 account at a time.

If you’re looking for a way to have an additional phone number on your smartphone to both receive and make calls from, Line2 is a good choice.

Line2 has three plans starting with the free app for iOS and Android, which is only good for calling other Line2 users, the personal plan for $9.95 per month, and a business plan for $14.95 per month.

Read our Line2 review for more on this possibly free solution.

OneSuite Business, among other things, lets you have a phone number on iOS and Android devices by installing the OneSuite app. The OneSuite mobile app also integrates with your smartphone contacts.

OneSuite features include call history, three-way calling, call waiting and more. OneSuite Business can be just for you, or you can set up sub-accounts (up to 999), e.g., for multiple employees. All service is pre-paid, so there’s no danger of running up surprise big OneSuite bills (pay attention to any applicable data charges or overseas calls, though!)

Pricing starts at $2.95 per month, plus per-minute charges for outbound calls and any data charges incurred on the user’s monthly wireless plan.

Check out our OneSuite Business review, and learn about a better alternative. 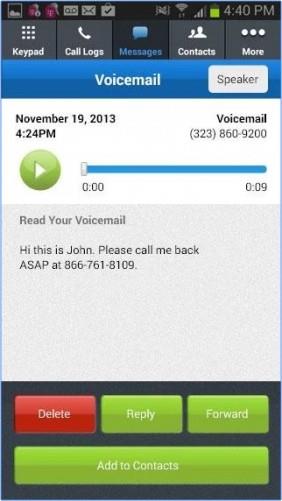 Among a legion of business phone number apps that service both iOS and Android users alike, eVoice distinguishes itself through a logically laid out UI, a host of simple but powerful menu options, and affordable monthly rates that range in scope for sole proprietors to small businesses.

In addition to assigning users a secondary business phone number, the app features include a call history log, speed dial, and outbound caller ID that displays the eVoice phone number being used. Incoming calls can be programmed to go directly to voicemail or to forward to another phone number.

The initial app download is free, as is the ability to use eVoice to determine if it works well enough for business purposes to pay the recurring monthly rate. Upgrading to the pay plan costs $12.99 per month, which allots a total of 300 monthly minutes, two extensions, auto attendant features, conference calling, voicemail transcription and more.

Learn more in our eVoice review.

BusinessCall is available for both iOS and Android users and comes by way of a freely downloadable app that gives you a second line on your smartphone for calls and texting. 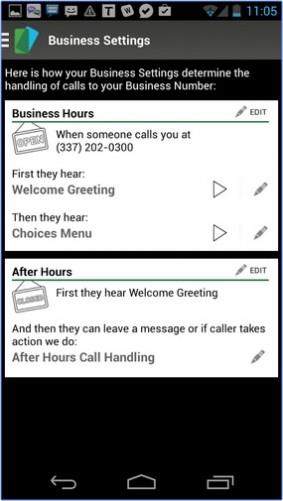 You can download the app for a free seven-day trial. After that, plans start at $5.99 per month for 100 minutes or 200 texts. It offers a pay-as-you-go option which lets you add additional minutes if you run out. The unlimited plan, which imposes no limits to calls or texts, will run you $12.99 per month. You can choose a new number with a specified area code anywhere in the country, or you can transfer an existing number.

You can set BusinessCall’s after-hours mode to establish those previously discussed business boundaries. In addition to calling and texting, the service brings a separate call log for the assigned business number, a welcome greeting, auto attendant, and visual voicemail. Incoming calls also display any notes you’ve entered in about specific callers.

RingCentral is a cloud-based alternative to the traditional phone PBX system. It can makes sense for business owners with employees at one or multiple locations, especially employees with iOS, Android and Blackberry mobile devices. Business owners will appreciate RingCentral since it integrates with Oracle, Office 365, Google, Dropbox and more.

Starting at $24.99 per month for a single user with 1000 minutes, RingCentral offers a complex cloud platform that may not be the right choice if you’re just looking for a second phone number. However, if you want to move your company into phone features galore, you’ll find it has robust offerings, albeit at a higher price.

Check out RingCentral review to learn more about its features. 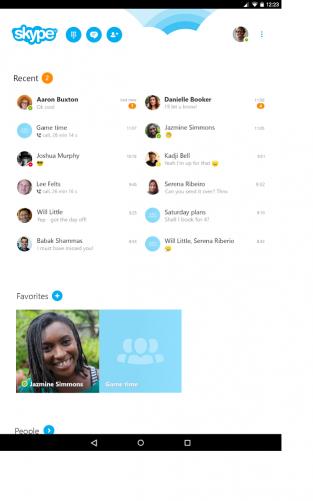 Probably everyone has used Skype to make free video calls. Offering support for iOS and Android devices, you can use the Skype app on your smartphone or tablet to connect remotely without being tied down to your computer. But Skype isn’t just about placing video calls to relatives in distant places. You can also use Skype as a secondary business line by subscribing to a Skype number.

Skype numbers can be assigned area codes in any location in the U.S. For example, if you live in New York but the vast majority of your clientele or business partners live on the West Coast, you can get a Skype number with an area code that will not charge them long distance. International numbers are also available.

Learn more about Skype for Business in our review.

This article was originally published in September 2013 and has been updated by Vince Font.