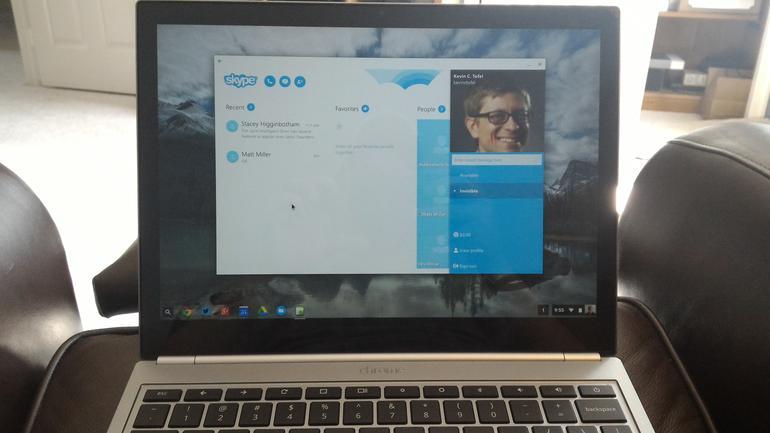 As a full-time Chromebook user, I can sympathize with my ZDNet colleague, Ken Hess.

I don’t know if Microsoft will ever bring Skype support to Chrome OS devices, but there is a way to get Skype running on a Chromebook now and it was Google that created the tool to make it happen.

A few words of caution are in order.

First, to get any Android app on a Chromebook, you’ll need the zipped installation file of that app, which is known as the .apk file. The Google Play Store doesn’t provide these directly, so you’ll have to search for and get the Skype .apk file.

Be forewarned and cautious before downloading any non-official version of Skype, however; in other words, you’re attempting this at your own risk. Note also that in my testing, the most recent version of Skype that works on Chrome OS is version 4.9; higher versions fail to open for me at time of writing.

Once you’ve done that and have the Skype .apk for Android, you’ll need to package it for use on a Chromebook.

Once ARC Welder is installed on your Chromebook, launch it and you’ll see a simple screen to import the Skype — or any other — .apk file. After adding the .apk file for Skype, here’s what it looks like.

Note that you can choose different options for how you want the Skype app to run, i.e.: in landscape or portrait, for a tablet or phone, etc… In my case, I’ve used the above settings to provide the best experience possible. I don’t want the smaller phone instance of Skype running on the large display of a Chromebook, for example.

Of course, you don’t want to go through this entire process each time you want run Skype. That’s what the Download ZIP button is for: It provides the repackaged Skype app. You shouldn’t need it though.

Skype will now appear in the Chrome OS launcher after you complete this process, so you have a handy shortcut. And if for some reason, the app doesn’t appear there you can go to the Extensions page in Chrome OS — where you turned on Developer Mode — and see your new Skype “extension” available. There’s a launch button right there if you need it.

Is it handy, however? Absolutely. At least until an official version of Skype comes to Chromebooks; if it ever does, that is.