Since recent years, the iPad has become a great mobile device having tons of attractive and interesting features. The latest iPad devices are dotted with stunning features such as crystal clear display screen, wonderful battery backup, and fantastic multimedia options to help you listen to your favorite songs, watch movies anytime, anywhere or record Skype calls on Apple iPad. Moreover, today Apple industry has created a boom in the success of Apple’s iPad with its overwhelming collection of advance iPad apps to cater to the various needs of mobile users.

One of the latest additions to such apps is the Skype iPad app which is ideal to make voice or video calls not just from your desktop, laptop or Smartphone but also from the touch of your loving Apple iPad. This relatively new Skype app for iPad can be used with Wi-Fi and 3G networks as well. This iPad app offers you all the capabilities of your Skype desktop version such as sending text messages or making calls to landline or mobile phones from the ease of your iPad. It has a built-in Face Time app that enables you to make video chat with people not having Apple devices.

Skype iPad app is very useful especially when you are in a business meeting and want to record urgent calls that you will be need to reference to at a later point in time. So, if you are using an Apple iPad and want the Skype app to record your important calls, here’s how to record Skype calls on your iPad or iPhone without hassle.

How To Record Skype Calls On Apple iPad or iPhone

1. First of all, switch on your Skype call.

2. Then start your audio recorder app and hit the record button.

This technique will work even if you keep the Skype app in the background. There are various audio recorder apps available for recording Skype calls. But the best 2 apps to record Skype calls on your iPad are:

It is a free app that enables you to record any voice on your iPad. It has several interesting features that allow you to record ideas, voice memos, voice email, meetings, dictations or even complete class lecture in your iPad. The only limitation with this app is that it cannot be run as a background app and you can’t transfer it out of your phone if the audio file is increased by 5MB. 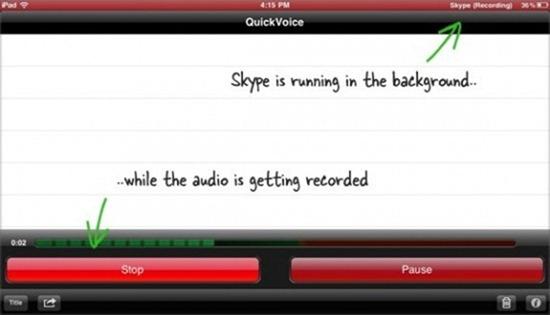 Audio Memos is also a powerful audio recorder app that best suits professionals. It is dotted with a wonderful easy to use, intuitive interface with some amazing features. You can use this free voice recorder app to record interviews, lectures, music sessions and simplify any of your recording projects. It can also be run in the foreground and supports background recording. 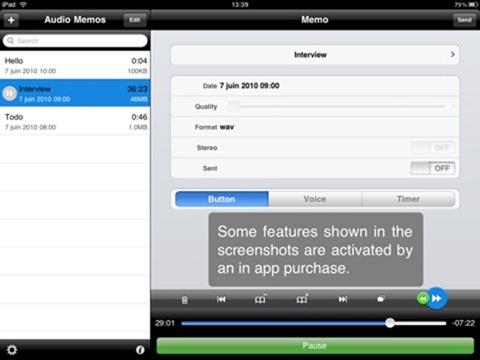 Apart from it, if you want to jot down notes while taking a Skype call on your iPad, you can use various apps such as Evernote, Audio Notes, Sound Notes and Note Plus.

One more interesting Skype recorder is Screen Chomp that records audio with drawing and exports everything as a single video file.

Now, you can easily record Skype calls on your iPad or iPhone without any difficulty.