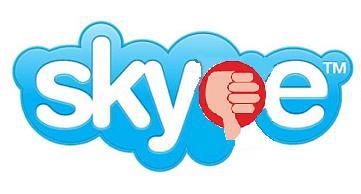 Since Microsoft bought Skype for 8 billion USD (“Don’t they know they could download it for free?”), it seems Skype had more downtime than ever before.

Some of the problems are at the level of the server, but the most annoying problems have been the automatic (Read: “Forced”) upgrade to Skype version 5.3 on the users’ computers…

It seems at the time the Skype Microsoft Gods please, Skype decides to upgrade itself to 5.3, and there is nothing you can do to stop it. The upgraded Skype crashes on many Windows 7 computers, and fails to start up on Windows XP. Skype recognized the problem, and came with a hotfix.

Which did not work neither.

So the only way that works for me is:

After that… all works… …Until three weeks later, when Skype on my computer decides to re-upgrade to 5.3… And crashes again. [[ Go back to (1) ]]