The phrase “I wish I could quit you” takes on a whole new meaning when you want out of a relationship with an internet service. Sure, you once thought you and Facebook or Amazon or Netflix would be together forever, but terms of service change, end-user license agreements mature, and, well, you’re just not in the same digital place anymore.

Sadly, not all websites and social networks and online retailers are created equal when it comes to breaking up. With some, it takes only a couple of clicks to say goodbye. For a few sites, if you stop paying for the service, the site cuts ties fairly quickly. Others make you jump through more hoops. Even after you follow all the required steps, some sites never quite leave you alone, with vestiges of your relationship around forever.

No matter what you call it—deleting, canceling, removing—when you want to be rid of an online account, many sites don’t make it easy. You don’t want to rush into a breakup, but if you’re ready, we’ve compiled the links, tips, and—in the most extreme cases—the phone numbers you need to sever ties. (And let’s be clear, there’s a difference between deleting an account and just deactivating it. We’ll spell out the differences for each account, as needed.) Also, sometimes legality prevents a service from deleting everything you’ve posted publicly in the past, so remnants of your time there could remain in perpetuity.

This list includes the big-name sites most people use. If you’re looking for a site that’s not on our list, check out AccountKiller.com and JustDelete.me. Each serves the same purpose—to let you know which sites and services make it easy to leave, which make it difficult, and which make it damn-near impossible.

Facebook The mac-daddy of social networking, Facebook had 1.86 billion monthly active users as of late 2016, almost double what it had in 2012, so it probably doesn’t miss the few who decide to delete or deactivate accounts. But before you give Zuckerberg and Co. the old heave-ho, keep in mind that Facebook has become an almost-de-facto log-in option for many online services, retailers, and media outlets. Some even require you to use Facebook. So killing a Facebook account could lock you out of more than just one social network, which makes some people very cranky.

If you’re ready to cut ties, the link to deactivate is in your account settings, found under Security, but here’s a direct link to use while logged in. You can find it on the desktop or the mobile apps. Facebook will try to convince you to stay by showing you photos of the friends who will presumably miss your online presence. If you forge ahead through your veil of tears, Facebook will ask you to specify why you’re leaving, then opt-out of future emails, agree to delete any apps or pages you’ve developed, and hit confirm. 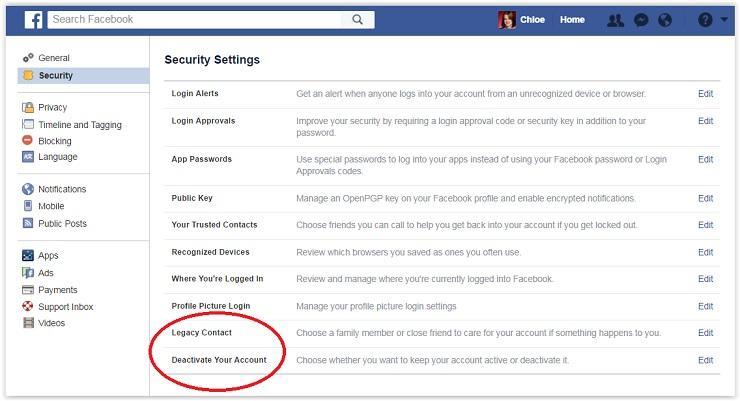 This effectively puts your account to sleep. Facebook will leave you alone, but there’s the option to reactivate.