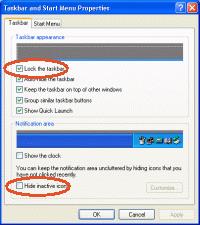 After you start the computer, one or more of the icons that should be present in the system tray (notification area) of the Taskbar are often missing.

The cause of this problem is not known, but it’s almost certainly a bug in Windows XP.

There is no known solution, but there are workarounds that may reduce the frequency of this annoying occurrence.

You may know this already, but the Windows XP task bar has an option to hide unused icons. So the reason some icons are disappearing might be that you haven’t used them for a long time and Windows has decided that they should be hidden. To check this option:

If this isn’t the cause of the problem, then Microsoft’s recommendation is to select “Lock the taskbar”. It didn’t work for us, though.

One piece of advice we’ve frequently seen offered to people suffering from this problem is to disable the SSDP Discovery Service and the Universal Plug and Play Device Host. To do this, open Administrative Tools in Control Panel, and then open Services. Select “SSDP Discovery Service”, right-click it and select Properties. Change the startup type to “Disabled” and then click OK. Repeat this for the “Universal Plug and Play Device Host.”

For a simpler way to do this, download and run the file upnpoff.reg to disable the services. To restore them to their default states download and run upnpon.reg. If you have a pre-SP1 version of Windows XP then disabling Universal Plug and Play is a good idea anyway as there is a known security vulnerabilty in it, although by now you should have Windows XP SP2, which fixes this.

Disabling Universal Plug and Play didn’t work for us, either. However, several people have found that that the problem was solved by changing the startup options for the two services to “Automatic”, instead of disabling them.

An increasing number of devices require Universal Plug and Play services to work correctly, in which case it is not possible to follow the advice given above. Many people have claimed that a suggestion known as the Ostuni Workaround (named after Francesco Ostuni, who first wrote about it) solves the problem. This is only available if you have Windows XP SP2 (which you ought to have, by now.)

Open “My Network Places” and in the left-hand Tasks panel, select “Hide icons for networked uPnP devices”. (If you’re using Windows Classic folders you’ll have to change the Folder Options to “Show common tasks in folders” to see this. This stops the display of the icons but does not disable the services needed for some devices to work.

Although many people have found that this solution works for them, others have not. So we think that the cause of the problem lies somewhere else, but that having uPnP devices trying to display icons make it more likely to occur. If you aren’t using any uPnP devices, then something else is interfering with the display of icons in the system tray, and so this workaround isn’t likely to help.

The problem of tray icons not appearing in the system tray (notification area) usually occurs when starting the computer, when it is configured for automatic log-on. The problem does not usually occur if you log out and then log back in again. Logging out and then logging back in again is a pretty reliable workaround for the problem, but it is a bit of an annoyance if you have to do it every day.

Another possible solution is to disable automatic logon. To do that:

This method will often solve the problem. or at least make the problem of missing Taskbar icons occur much less often, but it’s a nuisance if you’re in the habit of just turning the computer on and walking away while it gets on with all its startup tasks.

Use a startup manager

The solution that appears to be most effective is to delay the launching of the various startup tasks so they don’t all try to run at once. Windows doesn’t allow you to do this, but it can be achieved using a third-party utility like Startup Guru or StartUp Organizer.  These tools give you greater control over the programs that are launched at startup, by allowing you to specify an optional delay before a task is launched. This should give you the control you need to resolve the problem.

You will need to experiment to find out which tasks need to be delayed, as it should not be necessary to delay most of them. If you have a permanent Internet connection, ensure that any personal firewall software always starts first.