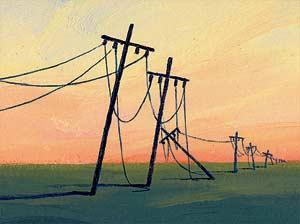 THE term “disruptive technology” is popular, but is widely misused. It refers not simply to a clever new technology, but to one that undermines an existing technology—and which therefore makes life very difficult for the many businesses which depend on the existing way of doing things. Twenty years ago, the personal computer was a classic example. It swept aside an older mainframe-based style of computing, and eventually brought IBM, one of the world’s mightiest firms at the time, to its knees. This week has been a coming-out party of sorts for another disruptive technology, “voice over internet protocol” (VOIP), which promises to be even more disruptive, and of even greater benefit to consumers, than personal computers (see article).

VOIP‘s leading proponent is Skype, a small firm whose software allows people to make free calls to other Skype users over the internet, and very cheap calls to traditional telephones—all of which spells trouble for incumbent telecoms operators. On September 12th, eBay, the leading online auction-house, announced that it was buying Skype for $2.6 billion, plus an additional $1.5 billion if Skype hits certain performance targets in coming years.

This seems a vast sum to pay for a company that has only $60m in revenues and has yet to turn a profit. Yet eBay was not the only company interested in buying Skype. Microsoft, Yahoo!, News Corporation and Google were all said to have also considered the idea. Perhaps eBay, rather like some over-excited bidder in one of its own auctions, has paid too much. The company says it plans to use Skype’s technology to make it easier for buyers and sellers to communicate, and to offer new “click to call” advertisements, but many analysts are sceptical that eBay is the best owner of Skype. Whatever the merits of the deal, however, the fuss over Skype in recent weeks has highlighted the significance of VOIP, and the enormous threat it poses to incumbent telecoms operators.

For the rise of Skype and other VOIP services means nothing less than the death of the traditional telephone business, established over a century ago. Skype is merely the most visible manifestation of a dramatic shift in the telecoms industry, as voice calling becomes just another data service delivered via high-speed internet connections. Skype, which has over 54m users, has received the most attention, but other firms routing calls partially or entirely over the internet have also signed up millions of customers.

A price of zero

The ability to make free or almost-free calls over a fast internet connection fatally undermines the existing pricing model for telephony. “We believe that you should not have to pay for making phone calls in future, just as you don’t pay to send e-mail,” says Skype’s co-founder, Niklas Zennstrom. That means not just the end of distance and time-based pricing—it also means the slow death of the trillion-dollar voice telephony market, as the marginal price of making phone calls heads inexorably downwards.

VOIP makes possible more than just lower prices, however. It also means that, provided you have a broadband connection, you can choose from a number of providers of VOIP telephony and related add-on services, such as voicemail, conference calling or video. Many providers allow a VOIP account to be associated with a traditional telephone number—or with multiple numbers. So you can associate a San Francisco number, a New York number and a London number with your computer or VOIP phone—and then be reached via a local call by anyone in any of those cities.

Furthermore, your phone (or computer) will ring wherever you are in the world, as soon as it is plugged into the internet. So you can take your Madrid number with you to Mumbai, or your San Francisco number to Shanghai. Skype and other VOIP services, in other words, are leading to lower prices, more choice and greater flexibility. It is great news for consumers—but terrible for telecoms operators. What can they do?

As is always the case with a disruptive technology, the incumbents it threatens are dividing into those who are trying to block the new technology in the hope that it will simply go away, and those who are moving to embrace it even though it undermines their existing businesses. Since VOIP will cause revenue from voice calls to wither away, the most vulnerable operators are those that are most dependent on such revenue.

In particular, that means mobile operators, which have been struggling for years to get their subscribers to spend more on data services, but are still hugely dependent on voice. Worse, the very “third generation” (3G) networks that are supposed to provide future growth for these firms could now undermine them, because such networks make mobile VOIP possible too. Least vulnerable, by contrast, are those fixed-line operators that are now building new networks based on internet technology, which will enable such firms to benefit from the greater efficiency and lower cost of VOIP compared with traditional telephony.

These operators are taking an “if you can’t beat ’em, join ’em” approach and getting into the VOIP business. While their voice revenues will slowly evaporate, they will then be well placed to offer fee-based add-on services over their new networks. Again, this is a common pattern with disruptive technologies: forward-looking incumbents can end up giving upstart innovators a run for their money.

It is now no longer a question of whether VOIP will wipe out traditional telephony, but a question of how quickly it will do so. People in the industry are already talking about the day, perhaps only five years away, when telephony will be a free service offered as part of a bundle of services as an incentive to buy other things such as broadband access or pay-TV services. VOIP, in short, is completely reshaping the telecoms landscape. And that is why so many people have been making such a fuss over Skype—a small company, yes, but one that symbolises a massive shift for a trillion-dollar industry.