Exchange and Skype for Business Integration

Further configuration of additional features provided by this integration will be covered in later articles, as in Unified Contact Store, Exchange Unified Messaging, and Outlook Web App with Skype for Business Server 2015.  For each of these additional integrations the following Partner Application relationship must first be enabled in the environment.  An updated listing of only the articles specific to Exchange Server integration with Skype for Business Server 2015 can be found using this link

The sections in this article are outlined in the following configuration steps:

In the event that Exchange Autodiscover is not correctly configured this could prevent the Skype for Business server and clients from being able to locate the Exchange server and thus cripple the ability to complete this integration.  The steps in this first section are optional and may not be required in all environments, so long as Autodiscover is correctly deployed.

In event that the existing autodiscover URL will be used then skip to the next section to configure OAuth.

Most likely when the Exchange Server was originally deployed the Autodiscover option was selected which would have included the proper FQDN in the certificate request.  To validate this the following commands can be used to identify and parse the server certificate currently assigned to Exchange Server roles.

As seen in the example above the desired certificate should be the entry with a FQDN in the Subject which is also assigned to at least the service.  This example snows that the Subject Alternative Name (SAN) field of the certificate in use by IIS already includes the desired FQDN of .

If the following two DNS records do not already exist in the environment then they need to be created before modifying the Exchange configuration.  These are the two well-known DNS records that mostly autodiscover-aware clients will query when attempting to locate an Exchange Server. 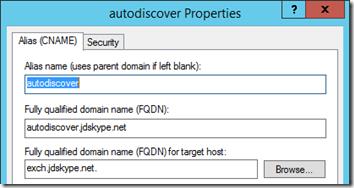 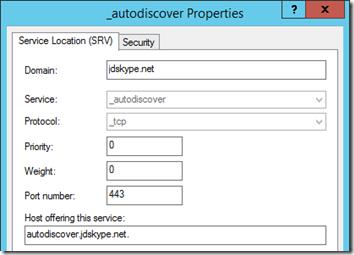 To validate the records were created successfully and are functional run the following two test commands from a command shell.

The Partner Application pairing provides the ability for the Skype for Business and Exchange servers to communicate with each other via an authenticated secure connection that does not require any third party system to negotiate or establish the session.

OAuth is the server-to-server authentication mechanism used between the Skype for Business and Exchange servers to establish secure communications.  During the initial SfB server deployment in this article an SSL certificate was created specifically for OAuth.

Before defining Exchange Server as a partner application Skype for Business needs to know about the Exchange Autodiscover configuration.

Pay special attention to the fact that the retrieved autodiscover URL points to an file; this will be important in a few steps.

The ExchangeAutodiscoverUrl parameter should be blank as it has not yet been defined.

In contrast to what was pointed out earlier the path provided above must end with and not ..  This is a minor detail not specifically called out in the TechNet documentation but can easily be missed, especially if cutting and pasting these strings between steps.

Enabling the partner application relationship requires that some configuration is performed on both side.  Starting with the Exchange Server configuration pre-packaged script will be called while passing a few parameters.  Before executing the script

To complete the pairing a new partner application will also need to be defined on the Skype for Business side.

To validate that the partner application relationship has been successfully established a simple cmdlet can be run from the SfB Server.

If the test cmdlet fails to return a successful result of “”  then here are a couple of the most common issues.

To resolve the above error define the proper ExchangeAutodiscoverUrl in Skype for Business server using the cmdlet as outlined earlier in this article.

To resolve this issue follow the directions outlined in this TechNet article to add the account to the RTCUniversalUserAdmins universal security group.

Now that Exchange Server has been successfully integrated with Skype for Business Server then additional features can now be deployed.  An updated list of articles covering other Exchange Server integration options can be found here.

Filed under Exchange, Skype for Business · Tagged with 2015, Deployment