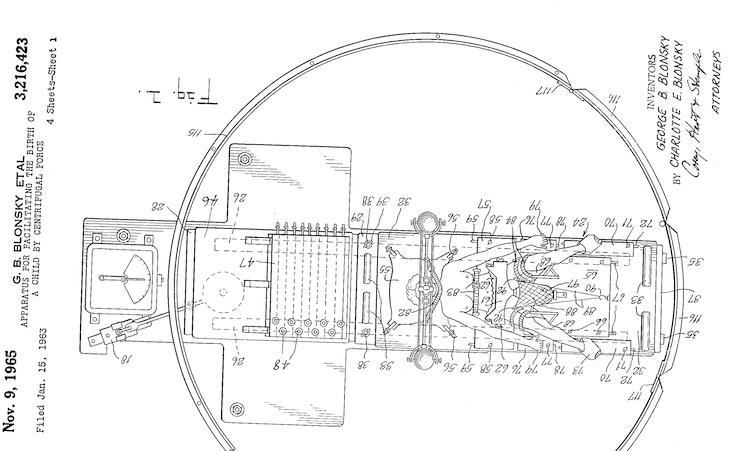 The first patent, granted on July 31, 1790, secured the rights for a thrilling new process for “the making of Pot ash and Pearl ash.” In the 224 years since, there’ve been millions of patents issued by the U.S. Patent and Trademark Office. And for every cotton gin and light bulb, there are a few more…interesting… patents issued. Like these…

In the 1960s, the centrifuge was still a rite of training passage for budding Apollo astronauts. Bronx residents George and Charlotte Blonsky thought another group of people might benefit from that technology: pregnant women. The plan: The expectant mom would be strapped firmly into a frame that would spin, generating a force (really centripetal force, since centrifugal force—the idea that there’s a force pushing outward on an object traveling in a circle around a point—is not actually real) that would ease a baby’s passage. The baby, rather than flinging off on a doomed trajectory, would be caught by a “pocket-shaped reception net.” Why, dare we ask, would such complicated midwifery be necessary? The Blonskys designed their contraption for “more civilized Women who often do not have the opportunity to develop the muscles needed” for childbirth. 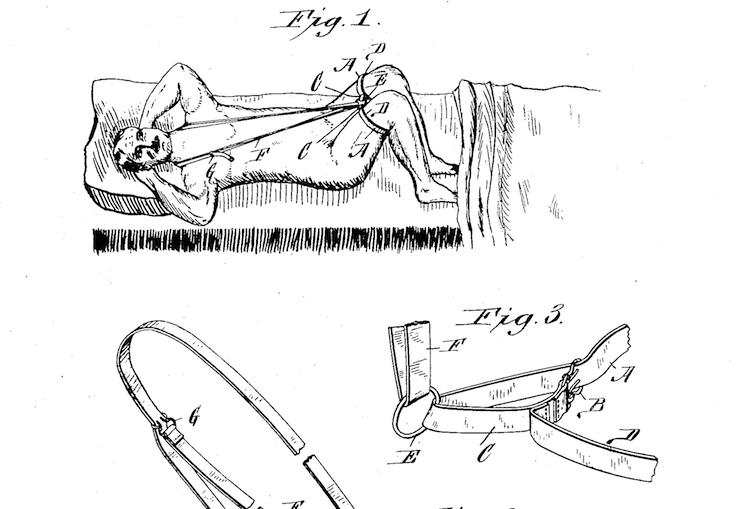 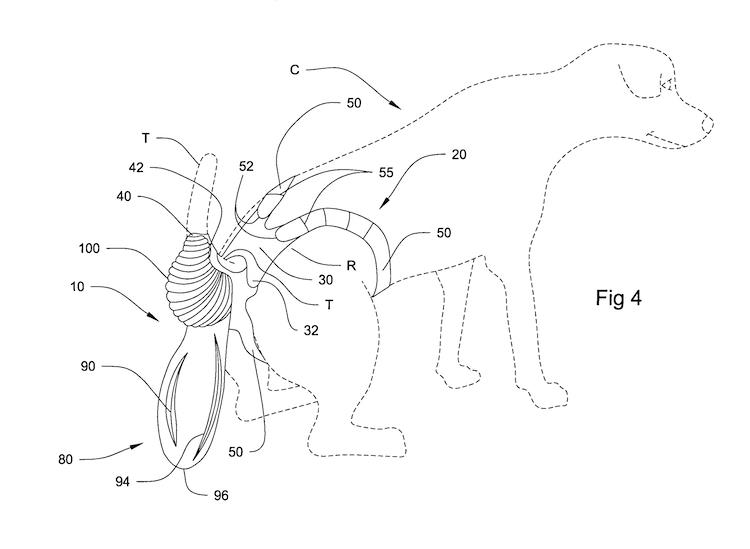 Inventor Bayron Rosales found a way to eliminate the very worst part about walking your dog: Just strap a bag to Fido’s behind! Rosales envisioned that his device could be nether-tethered to other prolific producers as well, like horses, and surmised that scientists studying animals could use the bags to collect fecal samples for further study. 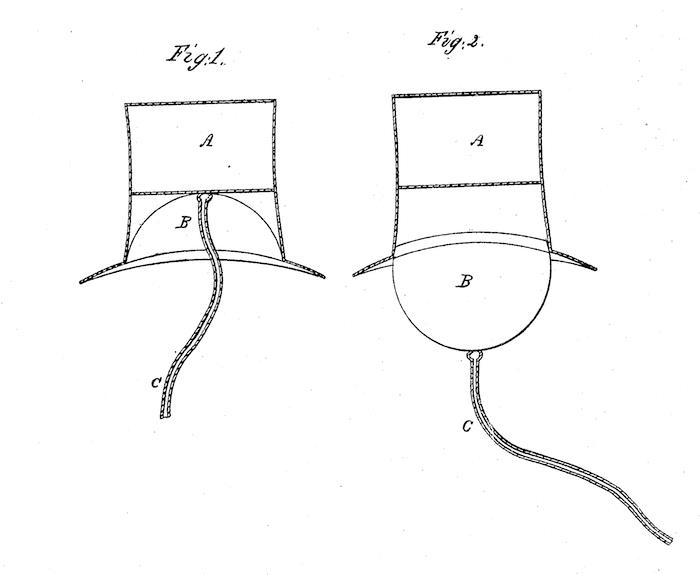 Ocean-bound Lincoln impersonators, rejoice! The key to Samuel White Ivhite’s patented anti-drowning hat was to make the empty space in the stovepipe portion of the hat into a waterproof air bag. Then, “when the hat falls off the head (provided it is connected to a person’s dress by a cord or ribbon and which it ought always to be) the lining becomes immediately inverted in the form of a bag and by grasping the neck or aperture of which and pulling the hat under water the person is powerfully supported without exertion and consequently prevented from drowning,” according to Ivhite. Just don’t neglect to tie your balloon hat to your knickers; there’s a good chap. 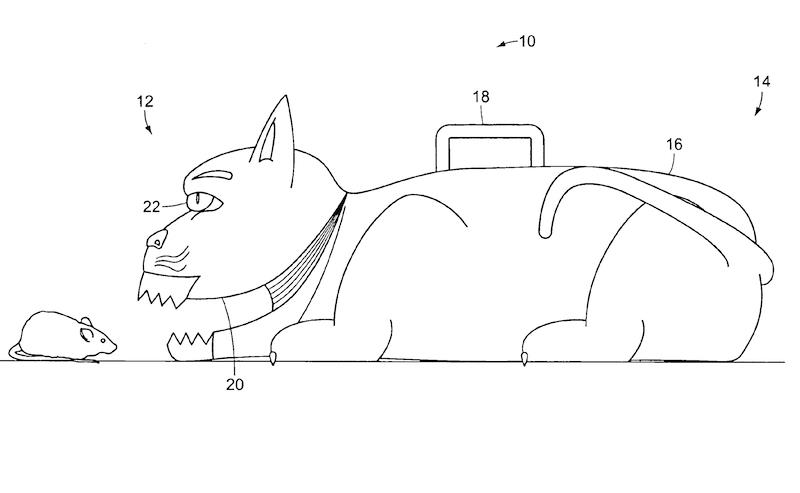 “Build a better mousetrap, and the world will beat a path to your door,” goes the saying—a misquotation of Ralph Waldo Emerson, who actually wrote about inventing better chairs, knives, crucibles, and church organs, but not pest control. Many Americans have taken this message to heart; there are thought to be more than 4,400 U.S. patents granted for mousetrap variants, most going to first-time inventors, according to the Atlantic. While this deliciously wicked 2005 design from Charles Borden gets points for originality (extremely important to the patent application process), it seems unlikely that even “a reservoir of a fragrance that smells like fresh cheese” would entice a mouse to climb into the open jaws of a cat. 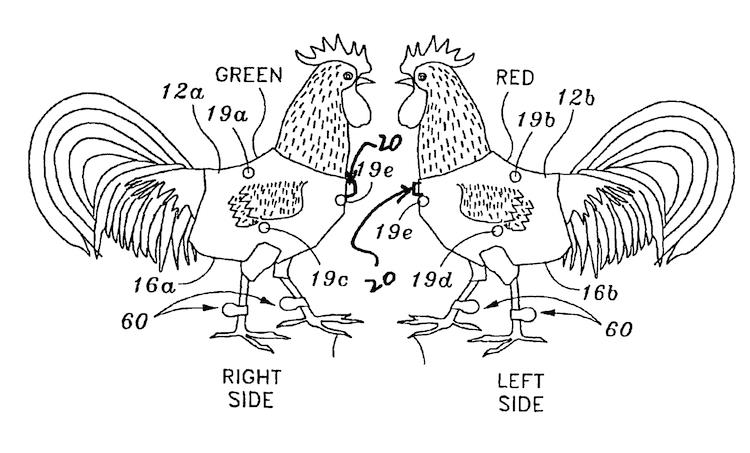 A trio of inventors dreamed up this device that promises cruelty-free cockfights, using an analogue to the electronic scoring technology used in modern fencing. The gamecocks wear itty bitty vests with sensors that can register blows from an opponent’s (taped) beak; when the sensors register a sufficient amount of force, it’s counted as a scoring blow. (In fencing, a button at the tip of the foil has to be depressed with a certain minimum force, and strike the right part of the opponent’s body, to count as a proper touch). The birds also have their spurs (bony projections on their feet, often fixed with sharp blades in run-of-the-mill non-electronic cockfights) covered with protective gloves. 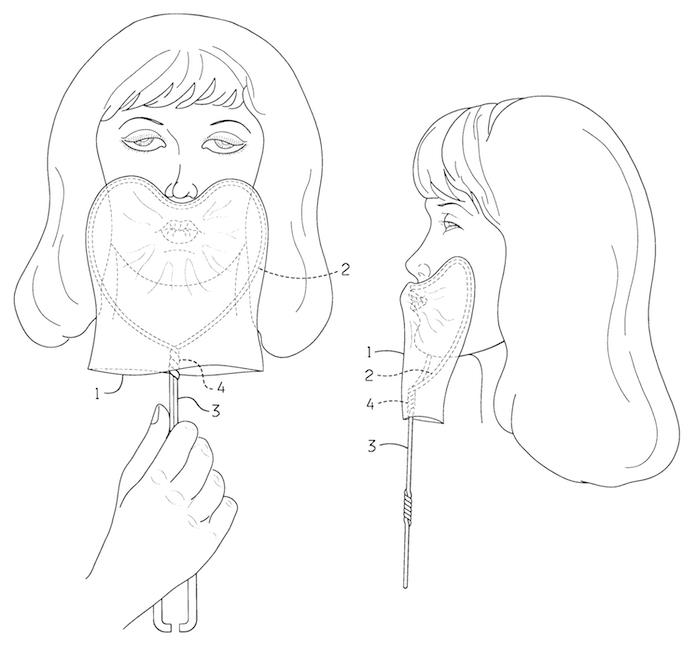 “It seems only natural that we would start at a fundamental level and teach ‘safe kissing’ before we teach ‘safe sex,’” writes inventor Deloris Gray Wood. To that end, she created what’s basically a dental dam on a stick: a heart-shaped handheld device with a plastic barrier, so you can enjoy the tactile sensation of kissing without the perilous fluid exchange. One suggested use: The device “can be used especially by a politician who kisses babies.” Deloris also created a board game to go along with the shield, which presumably one would play with protective plastic gloves and face masks. 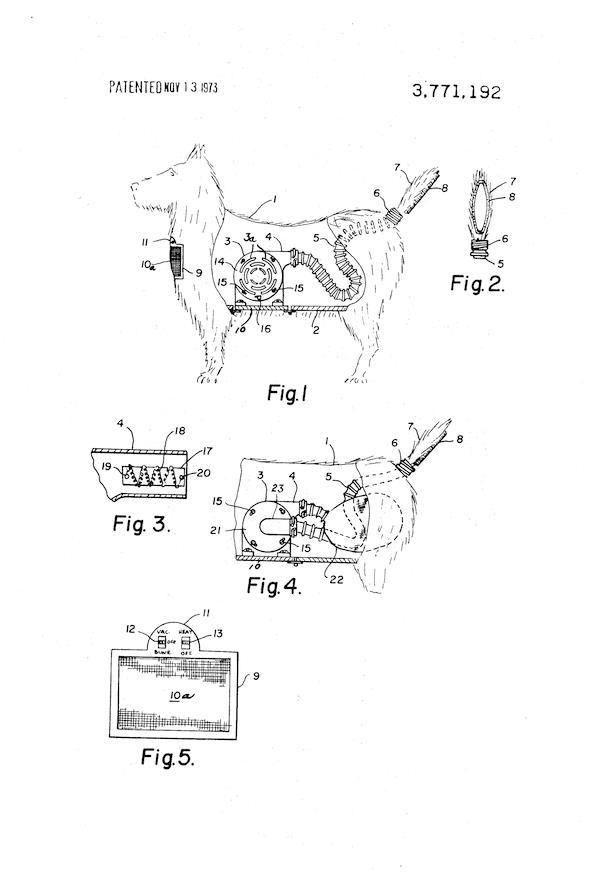 If we’ve said it once, we’ve said it a thousand times: What the world needs now is a combination toy dog and vacuum cleaner. Well, little did we know inventor A. Zaleski already obtained the patent, way back in 1973. The device is designed to safely vacuum a dog after grooming and fur trimming, via a hose artfully emerging from the toy’s rear-end. And for the truly adventurous, “the vacuum cleaner is convertible to a blower and air issuing from the tail end can be heated so as to serve as a dryer.” 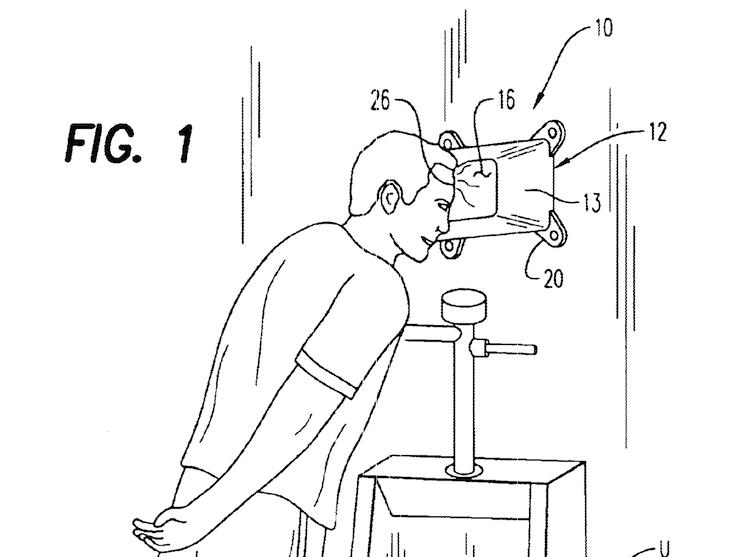 The patent description doesn’t explicitly identify inebriation as a requisite for using this device, but the target audience seems clear. “Those who are tired and weary and find themselves in need of using a urinal or a commode may find the time required to stand in an upright position excessively long and burdensome,” inventor Eric D. Page writes. “At present, the only option for in any way relieving the stress and tension of a tired or depleted body is to simply place the forehead against the wall.” His solution: Mount this patented foam pad at head height above a urinal (with optional paper dispenser, in case you’re delicate about mashing your face into public bathroom surfaces). 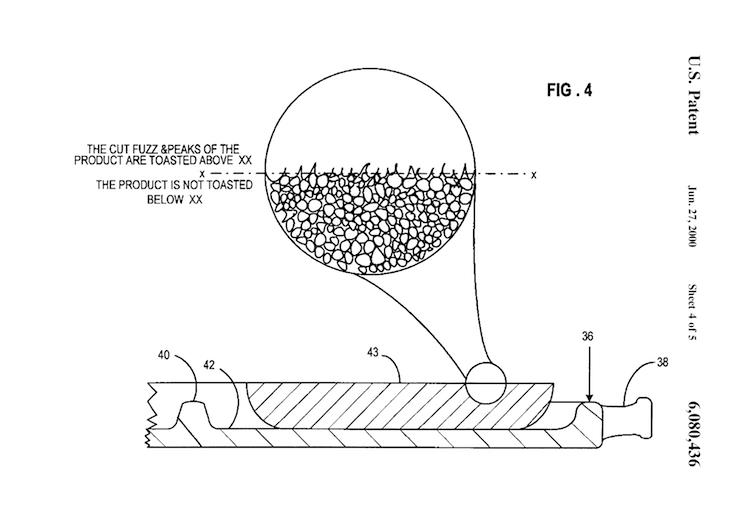 An episode of the public radio show “This American Life” called “When Patents Attack!” examined the weird world of ‘patent trolls’—companies that exist to buy up patents and threaten to sue other companies—and highlighted this particular invention. TAL and NPR characterized it as a patent for making toast, but it actually covers a supposed method for making stale bread products edible again—by putting them in a halogen oven that reaches temperatures of between 2500 and 4500 degrees Fahrenheit. “It is believed that both the redistribution of the existing moisture and a revitalization of the yeast organisms occur deep within the body of the bread product,” inventor Terrance Lenahan professes. Just how that amount of heat could resurrect yeast that’s been killed during the initial baking (with temperatures of just 140 degrees F sufficient to dispatch them) isn’t quite clear.