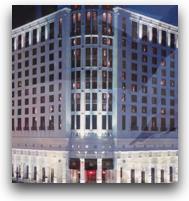 UPDATE: When I stayed at this same hotel in August 2010, I no longer had the issue with Skype being blocked. Presumably they got a smarter network monitoring system. While this specific hotel now works with Skype, the same issue will undoubtedly be out there for many other hotels and locations.

Two weeks ago on a visit to Voxeo’s corporate headquarters in Orlando, FL, I stayed at the Grand Bohemian Hotel, conveniently located only a block or so away. Arriving in the early evening, I checked in, got to my room and immediately plugged my laptop into the Ethernet port to catch up on what had happened while I’d been offline traveling. As is the case in many hotels, I was asked to login and pay through a system from “Nomadix”. I did so… and very quickly started to see Skype coming online, my other IM client (Adium) coming online, email starting to flow in and a website coming up.

No Internet connection. Offline. I did all the standard things… disconnect and reconnect the cable. Stop/start the network interface. Nada. Nothing. Dead.

The technician unblocked my IP address… I saw that I was online again… and then after a minute or so I wasn’t. I called back in, spoke with a different technician, had the same experience and stayed on the phone for a good bit investigating the matter.

And here is my dilemma:

Every time I connected, Skype was initiating hundreds of network connections to update all of the group chats that I had open. This, of course, was triggering the rules in the Internet gateway and landing me on the blocked list. If the technician unblocked me (or later testing seemed to show that every 15 minutes or so the block was released), I would then wind up blocked again after only a minute or so.

As a security guy, I do understand some of what the company is trying to do here with the limit. They do have to treat the hotel network as “hostile” to a certain degree. Someone with malicious intent might connect to the network and try to execute a Denial-of-Service attack or send out spam. Or someone might unwittingly be infected with a bot that is commanded to execute some attack. They also want to prevent someone from sucking up all the network bandwidth so that other hotel users receive poor service. Limiting the network connections is one way to potentially try to deal with these type of attacks. Unfortunately, the limits also restrict the legitimate usage of Skype.

THE BASICS OF PEER-TO-PEER (P2P) ARCHITECTURE

If you look at a “standard” instant messaging (IM) service, all of the IM clients connect in to a central server (or group of servers). From a network point of view, it looks like what you see in this image:

This could be for AOL/AIM, MSN/WLM, Yahoo!Messenger, Jabber, IRC or pretty much any of the other IM services out there outside of Skype.

From a network traffic point-of-view, each IM client is opening up a small number of connections to the central IM service. It might only be a single connection, or it might be a couple… but it’s only a few. All traffic, both control messages and the messages themselves, travel across those few connections – and all through those central servers. 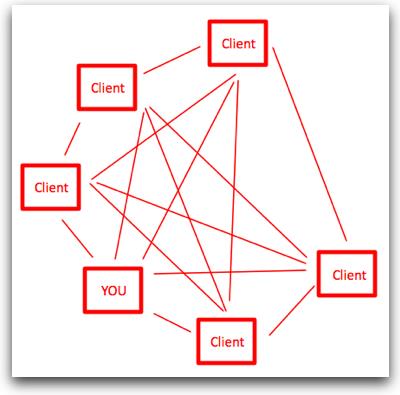 It’s a “mesh” network where all of the service clients are interconnected with all the other clients. (In fact, the term “peer” is typically used instead of “client”.) Typically in a P2P network this “overlay network” may be a “distributed hash table” (DHT) using a protocol like Chord or Bittorrent. It sits on top of a systems existing IP connection to the Internet – hence the term “overlay”. So this is a P2P network sitting on top of the regular IP network.

Caveat: I am not an employee of Skype and have no real connection with Skype other than having been an user for something like 5 years now. The material below is based on educated guesses – and could be entirely wrong. (And I’d love it if someone from Skype would confirm or deny any of the info here…)

Skype uses some type of P2P network for communication between Skype clients. When your Skype client comes online, it connects to the Skype P2P overlay network. I don’t know personally what protocol Skype uses for its overlay network, but odds are that it is some kind of DHT or similar system. Now, Skype’s network is not entirely a P2P network in that there are some centralized services that do, for instance, authentication (which were part of the outage back in August 2007), but for the most part it’s a big P2P cloud.

This is a huge benefit to an IM-centric organization. If you shut your computer down at the end of the day, or if you are traveling, you simply reconnect and have the complete history of all communication that occurred while you were offline. It works fantastically well for globally distributed teams. I use it heavily within Voxeo and for external teams as well.

The answer, of course, is:

So if I am in a Skype group chat with five other people, all the text we type is stored in the Skype overlay network and specifically in a mini-network or “ring” between our 6 nodes. Now… we don’t know Skype’s P2P protocol to know precisely how it is stored across the nodes… but some parts of the text are probably found in all the members of our little ring. 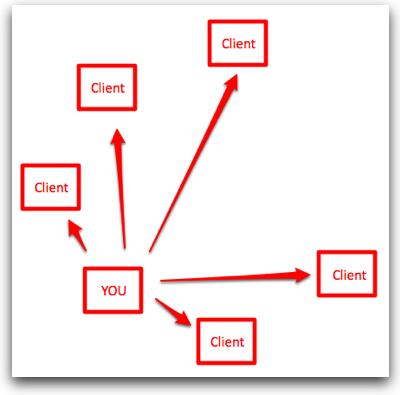 Now, if you look at it from a network traffic point-of-view, 1 Skype groupchat generated 5 network connections. (And that assumes only a single connection is made per Skype node.) From various discussions and research over the years, the rule seems to be:

For the purpose of this post, let’s assume that is still accurate… and so any chat with more than 15 users generates 15 network connections when your Skype client comes online.

THE CHALLENGE OF THE HEAVY SKYPE CHAT USER

Without actually going through and calculating the precise number, I’m going to guess that the average number of participants across the 61 group chats is probably around 10-20.

What can hotels do?

It’s 2010 – the reality is that Skype isn’t going away… and P2P architectures are continuing to evolve and provide interesting ways to solve communication challenges. The fully-meshed P2P overlay network will continue to be a feature of proprietary networks like Skype as well as standards-based solutions. Travelers want to use communications solutions like Skype… and hotels and their Internet providers need to figure out how to allow the legitimate usage of these tools and services while still keeping their controls in place to block malicious network usage.

P.S. This issue has been around for quite some time… I wrote about another hotel blocking Skype back in 2007. Same issue… blocking on *quantity* of connections versus actual network impact.

If you found this post interesting or useful, please consider either subscribing to the RSS feed or following me on Twitter or identi.ca.