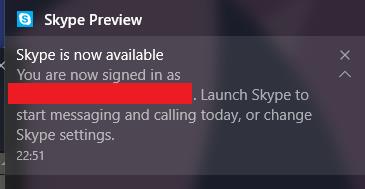 The Windows 10 Anniversary Update was released earlier this evening, and I dutifully installed it so that I could write about any oddities that might pop up. Well, a number of oddities have popped up, and they’re bad – really bad. The Anniversary Update does some really shady stuff during installation that it doesn’t inform you of at all until after the fact.

Imagine my surprise when I open that useless Metro notification center thing – whose button now sits in the bottom right of the task bar, right of the clock, even, and is unremovable – and see that Skype is now installed, and that I’m logged in. This is a blatant disregard for users, and I’m sure tons of users will be unpleasantly surprised to see Microsoft forcing Skype down their throats.

Update: actually, the application isn’t removed entirely – it’s still there in the Program Files folder, but it’s entirely scrapped from search results and the Start menu. Effectively, for most users, that’s identical to removing it. What an incredibly odd and user-hostile way of dealing with this. You can see how the wording in the screenshot below is confusing regarding the removing vs. hiding issue.

Classic Shell released an update to fix the compatibility issue detected, so I hope my settings are still there somewhere, because it’d suck having to redo all of them because Microsoft just randomly deleted a program from my computer hid a program, without informing me or asking me for my permission. It could’ve just disabled the program, prevented it from running – why delete hide it entirely? Are they that desperate to try and get me to use their terrible excuse for a Start menu?