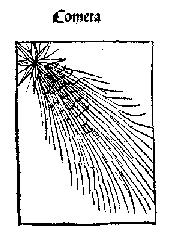 What Is The International Comet Quarterly?

Sample pages and articles from the ICQ are available online here. The October 1996 issue was Number 100 in the publication’s series (dating back to 1973), and it contained many pages of observations and images of comets from observers worldwide, plus articles on the history of total visual magnitude methodology; on comets for the visual observer in 1997; on the lives of two well-known comet observers, A. Mrkos and S. K. Vsekhsvyatskii; and an index for the first 23 years of this publication. Coinciding with this “century issue”, minor planet (5865) 1984 QQ — discovered on 1984 Aug. 31 by Antonin Mrkos — has been named Qualytemocrina (a play on the letters in the ICQ title; cf. Minor Planet Circular 28089).

The ICQ encourages authors to submit articles for publication in the journal; there is a referee system, as with most scientific journals. Actual computer images of comets (either obtained via CCD, or scanned into electronic images from drawings or photographs) may be sent to the ICQ for possible publication, but contact the Editor before sending images (e-mail address below), and read our instructions on sending images. Photometric observations should be contributed as noted below.

The ICQ Archive of Photometric Data on Comets. The ICQ maintains a computer database of photometric observations of comets, which includes all observations published in the printed ICQ plus data extracted from other journals (mostly historical, dating back to the 19th century). Each observation is given on an 80-character (80-byte) ASCII computer record with comet designation (this was expanded in 2002 to 129 columns for CCD observations); Universal Time (UT) year, month and date (to 0.01 day); magnitude (usually total visual), magnitude method, reference/source for comparison stars, and notes such as application of correction for atmospheric extinction, etc.; instrument type, aperture, and f/-ratio (and magnification, if visual) used for the observation; coma diameter in arcmin, and the coma’s degree of condensation (DC); the tail length and position angle (in degrees); the reference indicating where the observation was published; and a 3-letter, 2-digit code for the observer.

When a comet is less than 20 or 30 degrees from the observer’s true horizon, and he or she is making a total visual magnitude estimate of the comet (which is done via comparison with a de-focussed nearby star whose known magnitude is taken from an appropriate catalogue), the observer needs to appropriately correct his observed value for atmospheric extinction. A standard procedure recommended by the ICQ and published in the July 1992 issue of the ICQ is now available here online.