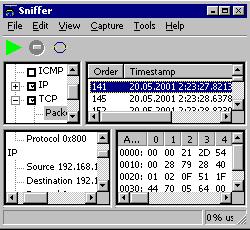 Then the packets go to protocol analyzers which are written as separate modules and their set may be extended by the user himself. Various analyzers may be interdependent and are organized in a tree structure.

The software will intercept all messages available on the network adapter.

There are two possible network designs implemented on your LAN: 1. Ethernet HUB hardware In this case all messages for all computers connected to the same HUB can be intercepted with your network adapter. There is no need to use an arp-spoof technique. 2. Ethernet Switch hardware. In this case you will see messages addressed only to you. This is why we decided to implement arp-spoof technique to allow the sniffing of messages of other computers connected to the same ethernet switch.

The results of each analyzer’s work may be saved in the Database.