I recently kept posting quite a lot about random stats from 300k/1M samples. Today something different for a change: non-obvious or less-known autorun entries.

Malware authors are really lucky.  There are so many autorun possibilities in Windows that it is really hard to count. One of the best known tools that try to enumerate most of the entries are Start Runners and Sysinternals’ autoruns. They both do a a great job by highlighting many of the suspicious files, but… deep inside the registry and file system exist a HUGE number of completely new, unexplored (or possibly less or under- explored) paths that can be (maybe already are)  misused.

Obviously, run-at-system start, run-at-logon are commonly used out of convenience, yet all file/registry locations supporting this persistence mechanism are already very well known and pretty much every single AV is always scanning these locations first (not to mention forensic investigators poking around on the analyzed system :)). There are of course many examples of other autostart locations that are not system/logon related and these include Browser Helper Objects, Layered Service Provider DLLs, codecs, protocols handlers, shell extensions, toolbars, deskbars, etc. etc. These are not all though and there is a lot of possibilities out there.  In this post I provide a quick brain dump of various ideas related to this subject – some may be considered silly, or not worth attention, but… oh well, it’s just a post about possibilities ? Better evil known that unknown.

The autoruns hidden inside other applications

One of the non-standard autorun entries that is probably the most known and documented is the ICQ entry stored under:

The old version of ICQ allowed to add a list of applications that it would launch when it connected to network – the following screenshots are taken from old versions of this great software (imho it used to be a real killer app!). 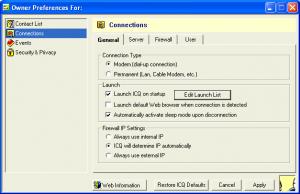 Adding calculator to be run by ICQ was relatively easy: 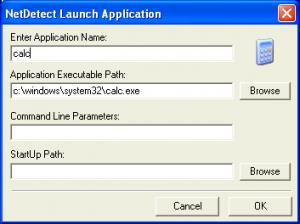 Looking at the registry under

would show us the actual entry:

I have a vague memory of successfully testing it ages ago, but since the old version no longer works and I was unable to confirm it for this blog post let’s just trust the evidence that can be found online: Googling for this key brings up quite a few hits that show evidence of it being actively used by malware.

As far as I know new versions of ICQ do not support it anymore.

This, obviously is not the only app ever developed that ‘by design’ helps in launching application when some task/event is completed.

For example, similar functionality can be found in many torrent applications e.g. utorrent: 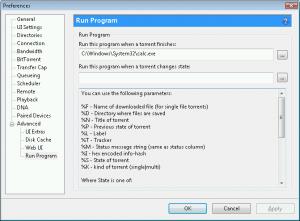 Adding the entry as shown on the screenshot would make utorrent launch calculator every time it finishes downloading the torrent (the actual data for utorrent autorun is stored inside its configuration file settings.dat). 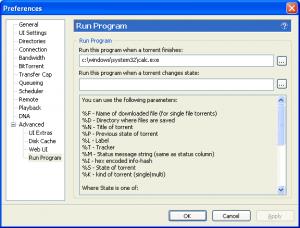 The even more hidden autoruns hidden inside applications

This is certainly a possible malware’s autorun as it will be executed anytime someone tries to preview/prelisten the video/music downloaded from P2p client or grabbed from a media grabber; again in a case of e.g. for utorrent: 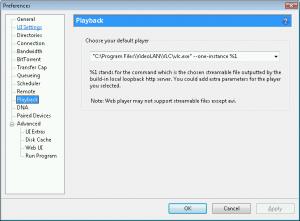 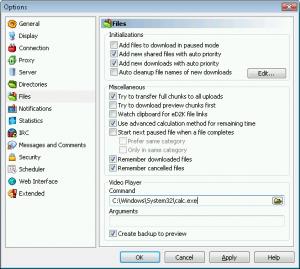 ‘Scanning’ files with AV when downloaded

Another option to place a malicious file resides in many applications e.g. browsers, mail clients. They allow to scan every single  file that has been downloaded from the internet, attached to email or received via Instant Messenger with an extremal application.

Such feature is available e.g. in Firefox with a Download Status Bar installed. 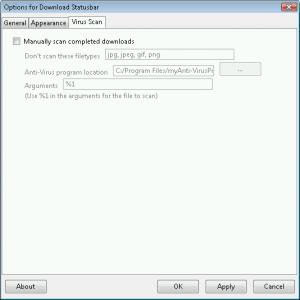 The about:config page shows the following options (false assigned to ‘downbar.function.virusScan’ property indicates the scan is being disabled)”

the default application selected is ‘C:/Program Files/myAnti-VirusProgram.exe’, but of course malware could easily replace it:

and modify the ‘downbar.function.virusScan’ property to true.

Notably, placing malware as ‘c:\Program Files\myAnti-VirusProgram.exe’ doesn’t seem to work due to slash/backslash war (this could be a neat trick if it worked).

Windows Explorer is not the only Windows Shell available. In fact there are lots of alternatives and each of them brings lots of new options to the table. Looking at programs used by hundreds of thousands (if not millions) of users and including Total Commander, FAR, and many others can cause a real headache. From an offensive perspective there are really a lot of opportunities: from plugins and extensions, to completely new (lame, but certainly workable) ‘rootkitish’ methods for hiding under (sic!) the shell (e.g. custom views, or even simple GUI attacks).

Most of producers of scanners/printers/combos offer  ‘associated software’ that will be taking control of many aspects of the dialog between the user, device and computer.

One of the tasks handled by the software is  ‘Start this program’ function which is an application that runs when certain events happen e.g. you press a specific button on the scanner/printer. The following screenshot is taken on a system with a CanoScan 4400F scanner attached to it, but with no software installed. The ‘Start this program’ option is grayed out. 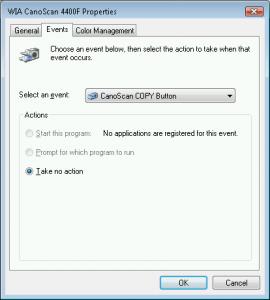 Installing a Canon Toolbox gives assigns this program to an event associated with various user activities e.g. pressing COPY button on the scanner. 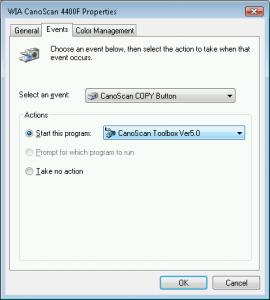 Clicking the ComboBox reveals more events – all of them are associated with the specific application: 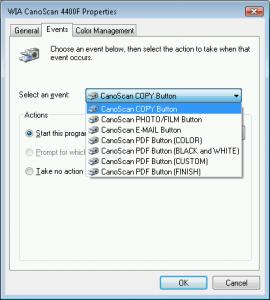 You are probably wondering now where the information about this is stored in the registry/on the file system.

The program responding to device events itself is an example of Push-Model Aware Applications added to the system via Windows Image Acquisition (WIA) / Still Image  interface (STI).

The location in the registry where the Push-Model Aware Applications installed on the system are actually listed are described in the article that I just linked to:

The programs registered this way can respond to STI events. Of course, malware could overwrite/manipulate the entry and act as a man in the middle between the devioe and the actual software configured to respond to the event. It could also be added to respond to certain events – the actual registry entries that need to be added are described here (I have not tested it though): and include:

Instead of adding new entries to Run/Startup folder, etc. malware can leverage existing registry entries. In many cases, swapping VERY common entries e.g. for jusched.exe from Java updater, or ctfmon.exe could do the trick. Another option is companion infection for active processes on the system – especially interesting for applications in a Portable format as they are used more and more often and not too many people actually inspect their content. They can also easily be hidden on an inspected system and escape routine analysis of Program Files directory.

I mentioned plugins in a context of Windows Explorer alternatives, the same goes for various office suites, Drawing/design applications, gfx viewers (note e.g. Irfanview has a subfolder storing all the plugins – DLL files) and so on and so forth. This is a tip of an iceberg.

One of the most interesting pieces of malware back in DOS era was DIR-II. It had a unique way of infecting executable files by modifying their cluster map in the FAT itself. Each .exe would point to a cluster containing the malicious code (always the same cluster) so with a malware NOT active in memory, the file system would appear to be corrupted (because of multiple entries pointing to the same cluster – a problem known as cross-linking). With malware active in memory it would ‘fix’ cross-linking on the fly and execute files properly.

The very same technique could be potentially implemented for NTFS – this would require placing a small .exe on a system then changing the cluster sequence within FILE Record to always point to a cluster occupied by .exe. Other alternative (especially for the one formatted with a FILE record larger than 1024 bytes) would require a tiny .exe that could be stored within the $MFT file record itself (replacing non-resident attribute with a resident attribute) while the actual clusters used by a host file could be stored either in a different part of the file record or within the malicious code itself. In both cases, small .exe would read original clusters and transfer control to the host. Very very non-trivial task. Luckily.