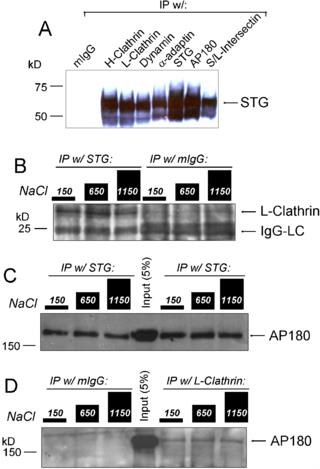 A. Rat brain synaptosome lysate was immunoprecipitated with an antibody against the protein indicated above the lanes (the IP-protein).

The captured proteins were eluted off the beads and were identified by standard Western blot analysis.

Synaptotagmin 1 (STG) was co-precipitated with all of the endocytosis proteins tested.

B.–D. After immunoprecipitation as in A, the beads were washed and split into three equal aliquots.

Each aliquot was exposed to one of three buffers with different salt concentrations before elution of the remaining bead-attached proteins and analysis by Western blot.

In each set of three lanes the left lane was exposed to control 150 mM salt, the center lane to 650 mM and the right lane to 1150 mM salt, as indicated by the diagram at the top.

In this panel AP180 was co-precipitated with STG in two separate trials (left three and right three lanes) with similar salt-resistant results.

D. Figures 1B and 1C show co-precipitation of L-clathrin with STG and AP180 with L-clathrin and both of these are resistant to high salt treatment.

Consistent with these findings, AP180 co-precipitates with L-clathrin (right three lanes) in a salt-resistant manner whereas IP with IgG is negative (left three lanes).

In C and D the center lane is 5% of the loading lysate used for the immunoprecipitation.