Last Friday we started our look into the history of computer messaging and which applications and services we have used to communicate over computer networks through the decades.

So far we have covered the time period from 1960 to 1990, i.e. the era before the birth of the World Wide Web that we live in today. Now it’s time to continue our journey through the history of computer messaging, from 1990 until today.

Since we have already covered some of the technologies that are in use even today, such as email and IRC, we didn’t include them here. For the curious, go have a look at part one of this two-part series.

So here they are, some of the most popular computer messaging applications and services during 1990-2009, including some less known ones that helped drive innovation and development forward. We chose to include some social networks here as well since they are widely used for messaging between friends. 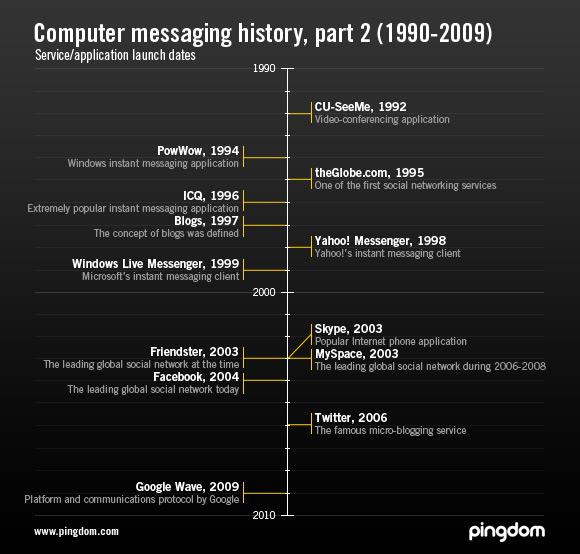 And here follows a more in-depth look at the apps and services mentioned in the timeline.

CU-SeeMe is a video-conferencing application that was first released for the Mac in 1992 and for Windows in 1994. The software made it possible to make video calls over the Internet. The earliest versions of the application only supported video. Audio support was added later on.

CU-SeeMe is recognized as a pioneer of video chat software and is was one of the first platforms that proved the viability of IP networks (i.e. in this case the Internet) to be used for real-time communication.

PowWow was launched in 1994 by a company owned by John McAfee, best known as the founder of the anti-virus and security company McAfee. It was one of the first instant messaging and chat applications available for Windows.

PowWow introduced several innovations such as allowing users to talk to each other (voice chat), shared whiteboards and sending messages to offline users.

The social networking service theGlobe.com was founded by two college students late in 1994 and went live in 1995. They managed to raise $15,000 to found their software company and buy the Apple Internet Server that they used to launch the service.

The company later went public in 1998 but was hit badly by the dot com bust in 2001. The website is considered as one of the first social networks.

ICQ is an instant messaging application which was developed by the Israeli company Mirabilis in 1996. ICQ was a huge success and AOL acquired the company in 1998.

ICQ was extremely popular during the end of the ‘90s and is still used by many today.

Blogs, such as the one you are reading now, was coined in 1997 by Jorn Barger, as “weblogs”. Later on it was shortened to just “blog”. In the beginning there wasn’t any dedicated software available such as WordPress so most blogs used custom solutions or were updated manually.