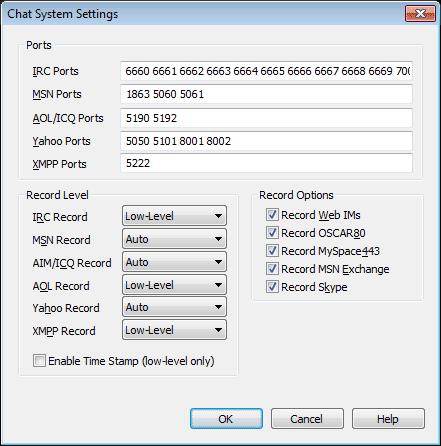 Add a Port to Record

Chat/IM System Settings allow you to record a non-standard port or change the method of capture for a type of chat. Under normal circumstances, you will NEVER change these settings. Select Record | Chat/IM Activity and click the System Settings button to access this panel. Only advanced users should attempt to make changes, so that recording is not compromised.

To add a port:

You can add or change a communications Port The destination for a particular type of data communication on arrival at an IP address. For example, HTTP web traffic normally occurs at port 80, and SMTP email often goes through port 25 the Recorder monitors for Chat/IM. This panel lists the default ports where the Recorder is listening for activity. To add a new port, in the appropriate protocol field, type a space following the given ports and type the new number. Click OK on the dialog box to save your changes.

To remove a port from monitoring:

Select the port number and press the Delete key on your keyboard, or use the Backspace key. If you change a port, the change will not take effect until the Recorder receives the settings and the user restarts the Chat/IM application.

About levels of capture:

A “protocol” (IRC, AIM/ICQ, AOL, MSN, Yahoo, XMPP) is the method of communication used by chat and IM services. The Recorder uses one of two approaches to capture each protocol: High-level or Low-level. The default settings are usually optimal for each protocol:

To change a Record Level:

First, determine which protocol to change. Then, use the drop-down list to select to another method of capture, or to disable recording.

To disable or enable capture other types of messaging:

The Record Options list displays additional chat types recorded by default. You may want to disable recording for approved chat (such as MSN Exchange) and still record all others. Alternatively, you may be interested in logging ONLY one type of Chat/IM. Checked options are recorded, cleared options are not recorded.

To enable a Time Stamp on low-level recording:

Check Enable Time Stamp if you want to add a time stamp to each line of the conversation when low-level capture is used. For example: