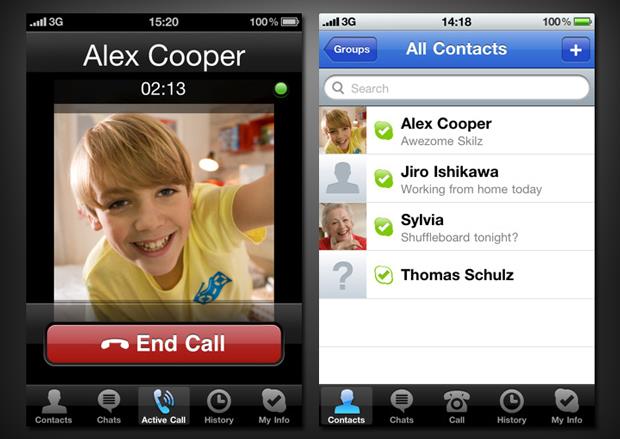 The iPod has come a long way since 2001. The second generation model sitting on my desk doesn’t have a color screen, weighs enough to be used as a self-defense aid and does little else than play music (though block breaker was a pretty cool feature at the time).

My iPod Touch on the other hand is an astonishing technological feat rivaling that of the iPhone. However, there are definitely a few major features that iPhone users enjoy that I miss out on. Fortunately, several app developers are on the task of closing this feature gap and have significantly extended the functionality of the iPod Touch.

Today we’ll look at ten apps that help make your iPod Touch a lot cooler by mimicking some of the basic features found on iPhones.

Why Not Just Get an iPhone?

If you’re an iPod Touch owner, odds are, you really wanted an iPhone but were ultimately forced to settle for less (not always the case, but true for so many). This is an all too common story due to the several hurdles that stand in the way of many would-be customers who would gladly fork over $300 for a shiny new iPhone.

The biggest hurdle for many US inhabitants is AT&T. This story typically goes one of two ways. One group of people has finally decided that they don’t care who their carrier is as long as they can have an iPhone. Unfortunately though, they’re trapped in a multi-year contract with another carrier and refuse to pay the cancellation fees for early termination.

The second group of people loathe AT&T and will never switch. Some of these people have just had bad experiences, others have never even tried the carrier but abstain because of poor reviews from friends and family.

Whatever your reason may be for not getting an iPhone, the truth is that an iPod Touch is an awesome alternative. It does nearly everything the iPhone does with only a few notable exceptions.

Let’s take a look at a few of the major missing features along with ten apps and/or devices that you can use to address the problem.

The first and most obvious feature is the ability to make phone calls. The iPhone is a phone, the iPod Touch isn’t. It’s as simple as that. Neither the hardware nor the software were built with this intention in mind, so can it be done?

Let’s talk about hardware first. The most recent models of the iPod Touch feature support for the Apple mic/remote headphones, meaning that they can in fact handle both the audio-in and audio-out aspects of a phone conversation. The bonus is that these calls can often be made completely free of charge and void of any contracts.

Unfortunately, the iPod hardware doesn’t have cellular capability so the software solution will have to be VoIP. With the options below you’ll essentially be making phone calls over your WiFi connection.

“With Skype on your iPhone, iPod touch or iPad, you can make and receive calls, and instant message anyone else on Skype, wherever they are in the world. You can also save on international calls and text messages to phones. Skype is free to download and easy to use.”

“Use your iPhone [and iPod Touch] to make inexpensive calls over the internet anywhere. Call International destinations for pennies a minute. Call friends on the same network for free. Save on roaming charges by using the Softphone to make calls while abroad. Set up multiple SIP accounts and switch between them depending on who has the best rate for your call destination. Make calls through your office PBX, using your business number from anywhere.” 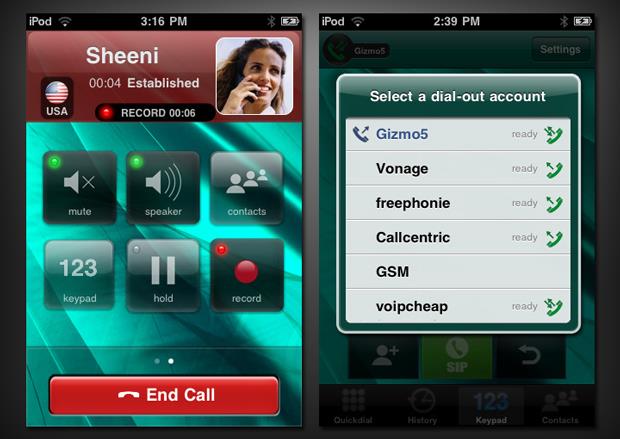 “Selected as a New York Times App of the Week, iCall is used by over 4,000,000 people worldwide. iCall is changing the way people around the globe communicate. iCall allows you to make and receive phone calls over 3G and WiFi, even when you don’t have a cell signal. Never pay a roaming charge again!” 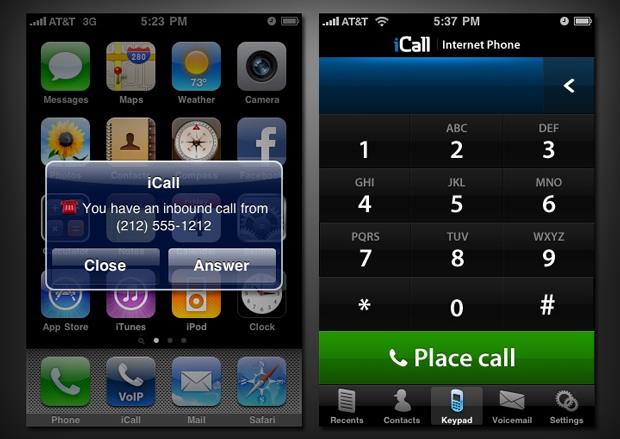 “fring is a multi-award winning mobile application that lets you make free voice calls, free video calls and live IM chats directly from your iPhone and iPod touch. fring operates as your mobile social hub. Communicate with your friends from fring and other favorite social services including MSN Messenger, GoogleTalk™, Twitter, Yahoo! , AIM, ICQ, all through one central profile, using your iPhone and iPod touch’s internet capability.” 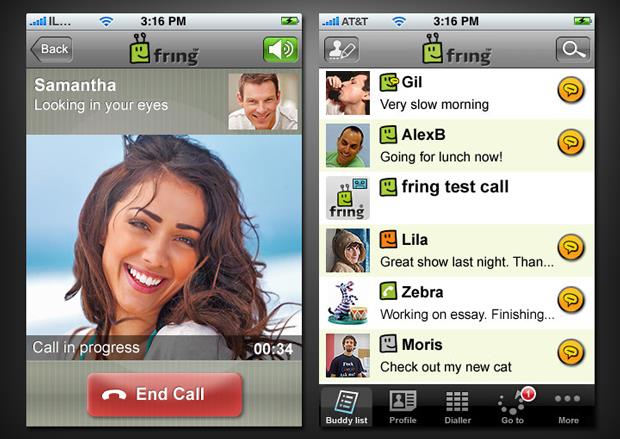 Another basic phone feature not found on the iPod Touch is text messaging. This feature can be even more important to many users as text messaging continues to become more popular than even calling.

Fortunately, there are a plethora of texting apps available for the iPod Touch that allow you to send free texts to whoever you want. Here are a few to try out.

“Yep, send and receive unlimited free texts from an iPod touch or iPhone to any US mobile phone. No catch, no hidden anything, no yearly fees!” 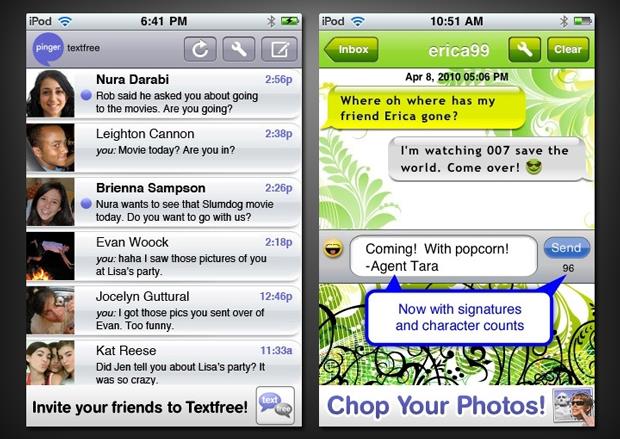 AIM doesn’t just do instant messaging, it also supports Facebook chat and SMS texting as well. It’s an awesome all-in-one messaging solution that gives you access to tons of your friends across various networks, all free! 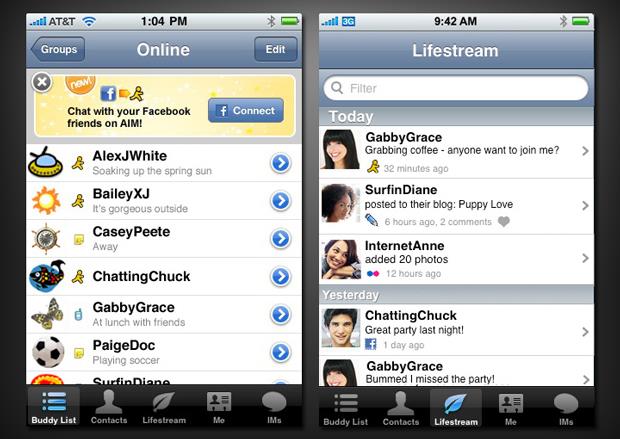 “The creators of Tweetie and Borange are proud to present Textie Messaging, the unlimited texting app for iPhone and iPod touch. If you and a friend both have iPhones but are still paying to text each other, we definitely recommend you try using Textie Messaging instead–and communicate for free.” 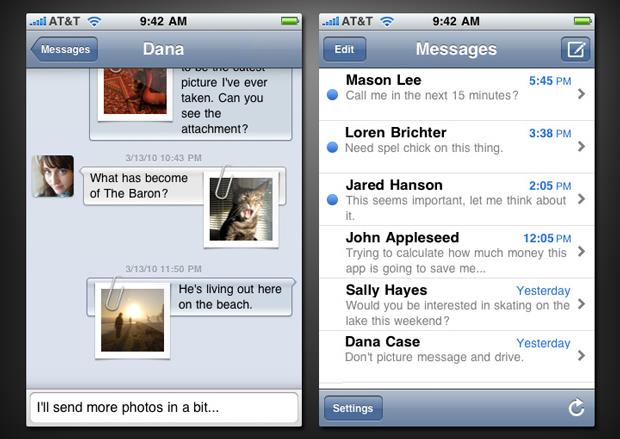 Despite unceasing customer demands, Apple has yet to put a camera in the iPod Touch. It’s interesting to note that if you pay $149 for an iPod Nano, you get a neat video camera, but if you fork out the extra dough and pay $199 for an iPod Touch, you get zilch.

This is definitely a temporary problem. With Apple promising to sell millions of FaceTime compatible devices, you can bet they’re going to start sticking cameras in both iPod Touches and iPads sometime in the near future (likely in the next couple months).

In the mean time, iPod Touch owners will have to remain without a solution for taking pictures… or will they?

This handy app allows you to control your Canon EOS or Nikon DSLR camera. You can “instantly adjust its settings, fire the shutter, review images, even get a live viewfinder preview.”

Technically, this app allows you to take pictures using your iPod. However, this is ultimately nothing like having a built-in camera (cut me some slack, it’s all I could find). Most people don’t have a 5D lying around and even if they do you still have to connect the camera to your computer making this solution not very mobility-friendly. But for any photographers out there, this is definitely a pretty neat app! 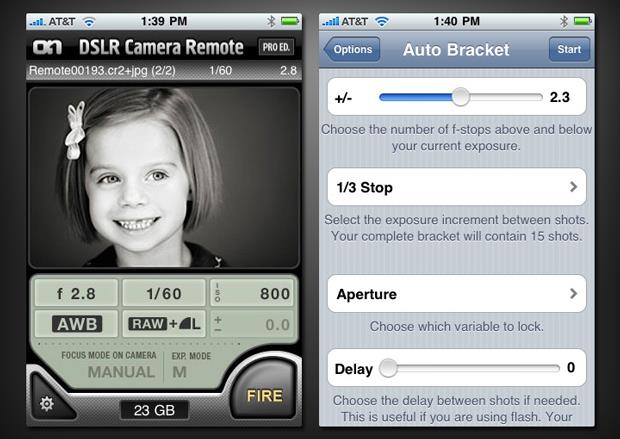 The most significant annoyance I run into as an iPod Touch owner is simply the fact that I often can’t connect to the web when I’m outside of my house. Fortunately, I live in a major city and hotspots are plentiful, but there are still lots of dead zones where I simply can’t connect.

The best way to rid yourself of this problem is to pick up a personal mobile hotspot such as the MiFi. These awesome little guys provide wireless Internet access to any Wifi enabled devices from anywhere that you would normally have cell service.

As another option, Sprint is rumored to be releasing a new product called “Peel” that is essentially a mobile hotspot wrapped in an iPod Touch case. This would allow iPod Touch owners to seamlessly experience the same kind of freedom that iPhone users enjoy.

Unfortunately, these options all come with fat monthly fees (my research indicates around $30-40/month on the low end). Since many iPod Touch owners see having no contract or monthly fee as a major bonus, this will likely still leave a large part of the market sticking to pure WiFi.

For these users, the best you can do is download an app to help you find local WiFi hotspots so that you can easily know if the place you’re going will have coverage or not.

“Quickly and easily find FREE or paid Wi-Fi when you travel with the JiWire Wi-Fi Finder for iPhone and iPod Touch. Download all of the locations offline, so you know how to stay connected when you are on the road. ” 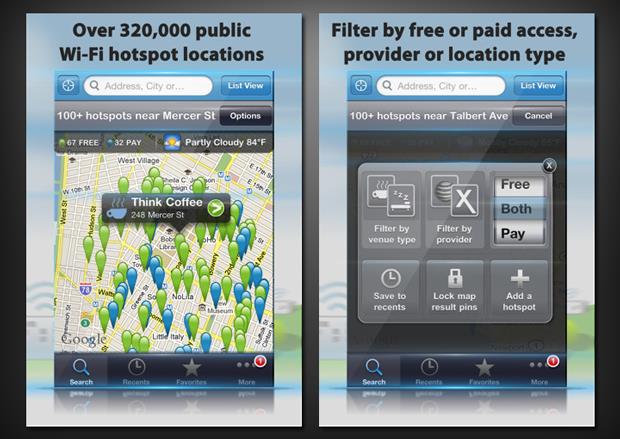 “Spots is a fast and beautiful hotspot directory containing half a million hotspots worldwide. Since Spots works offline, you can find hotspots from the included database. Spots does not use Wi-Fi to scan for nearest access points, nor does it contact any web services.” 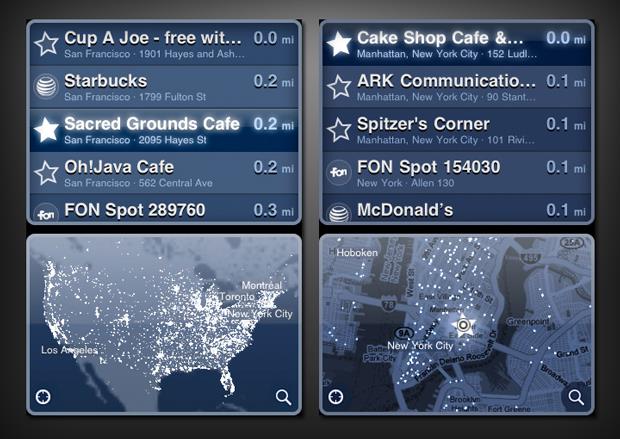 Unfortunately, the iPhone will likely always remain at least a little cooler than the iPod Touch. However, apps like those found above will continue to push the bounds of the iPod making it ever closer to an all-in-one media and communication device free from any contracts and not tied to a specific service provider.