While Facebook is known as a venue for racist uncles to share their terrible opinions with the world, it’s also responsible for what might be the most convenient and polished Android messaging client available: Facebook Messenger. This Android app lets you send text messages, make voice and video calls, and send a variety of media and even money. Best of all, just about everyone you know is already signed up. 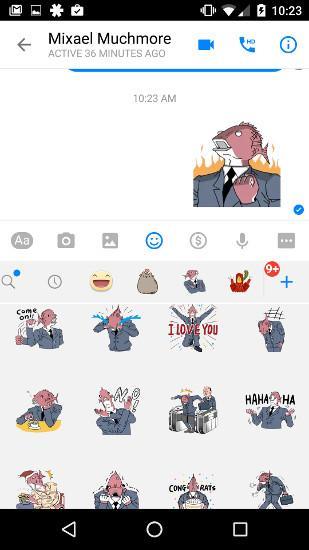 Some potential users may be pleasantly surprised to find that a Facebook account is not required to use Facebook Messenger. If you’d rather not link your Facebook account to Messenger or aren’t interested in Facebook, you sign up for Messenger using your phone number instead. However, doing so requires that you give Facebook Messenger access to your contacts. When I signed up for Messenger using only my phone number, it showed me a picture of a woman and asked if I was her. Apparently, she had the same phone number listed that I had used. Not to worry; I clicked no, and continued without connecting to Facebook.

The hardest part of any messaging service is finding other users. But because of Facebook’s ubiquity, it’s very likely that most of your friends are already onboard. Other messaging apps, particularly obscure or security-minded ones like Wickr or Signal, are a tougher sell exactly because of their limited user base.

You probably won’t have this problem with Facebook Messenger, considering that Facebook reported around 1.55 billion activeusers as of September 2015. WhatsApp, a popular messaging client since purchased by Facebook, only boasts about 900 million users.

The app uses Facebook’s trademark white-and-blue color scheme to great effect. All the page elements are blue and pop brilliantly against the app’s clean white background. The minimalist design also lets more colorful elements, such as images sent by friends and user pictures, stand out even more. Unlike other apps, which use badges to mark which messages are unread, Messenger uses the subtle but eye-catching tactic of bolding the name and preview of the message on the app’s main page. Each message gets a blue check-mark when it’s delivered to the recipient, and a tiny user icon appears next to it when the recipient has read the message. 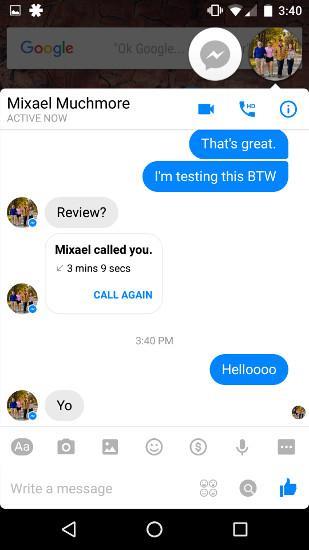 Unique to the Android version of Facebook Messenger are Chat Heads, which are round icons that hover over apps and the homescreen and provide fast access to Facebook Messenger. Chat Heads show the face of the message sender, and new ones appear when you receive a new message. Tap on them to open a Messenger window, complete with all of the app’s options, without opening the app. These debuted inside the main Facebook app, but were not well received. They make a lot more sense in this widget-y form for Android where they can act as shortcuts from any app or screen. I especially like that they show the full text of incoming messages for a few seconds, letting me decide if I need to reply. You can dismiss chatheads by tapping and dragging them to the bottom of the screen, and they can be disabled in the Messenger settings.

Messages in Messenger appear in a top-down running list, spanning back for as long as you’ve had correspondence with a given user. This includes messages sent through Facebook before Facebook Messenger was released. You won’t find any of Snapchat’s brevity and ephemerality here.

Part of what makes Facebook unique is what you can send in addition to messages. There are pedestrian offerings, like audio clips, images, and video, and custom emojis presented in large format by Facebook. But Messenger also lets you send money through the service (provided you’ve entered a payment option), and has thousands of cute, high-quality images called Stickers to choose from. I’m a big fan of the Pusheen and Business Fish images, but you’re sure to find something fun that suits your fancy.

Facebook Messenger also supports a variety of third-party Apps that add functionality to Messenger. While most of these let you search various databases for reaction GIFs (Giphy, Disney Gif, Memes, and so on), others add more complex tools. But one thing Facebook Messenger can’t do is attach files besides images to messages. WhatsApp supports file attachments, but you might be better off linking to a cloud-sharing service like Dropbox or Google Drive to keep your files centralized.

All of these special tools are available in group chats, which Facebook Messenger handles with aplomb. The app provides all the tools you’d expect for a modern group-messaging platform, such as the ability to add members to the conversation, remove yourself from a group, and mute notifications from a particular group. However, conversations do not have designated administrators or limitations; any user can add or eject any other user. That’s a bit looser than I like.

Using the PCMag Lab’s FiOS connection, I found the call quality to be crisp, with a surprising depth of sound during my testing. It’s definitely superior to the cellular call quality I’m used to. Likewise, video was acceptable in my testing, though that likely depends as much on your phone’s camera as its wireless connection.

While voice calling, video calling, and more exotic features like sending money are well executed in Facebook Messenger, I suspect they’re not popular. I have Facebook Messenger installed on my personal phone, and have never received a voice or video call. Nor has anyone ever offered to send me money through the service. But I have been asked to pay for things with Venmo and Square Cash, and I use Skype several times a week. If you decide to try these features, don’t be surprised if your recipients aren’t terribly receptive.