Facebook sure does. And, if the recently launched M Suggestions is any indication, the coders at the social media giant look back on the panic-inducing anthropomorphized paperclip with a bizarre degree of fondness.

Just what is M, you ask?

SEE ALSO: Facebook’s new emoji are finally available to everyone

“M is your helpful assistant in Messenger, powered by artificial intelligence,” reads an April 6 Facebook press release. “M offers suggestions by popping into an open conversation to suggest relevant content and capabilities to enrich the way people communicate and get things done.”

Basically, Facebook is stoked to yank intrusive helper-popups from the dustbin of history and plop them right onto your smartphone.

The company has been testing M for some time, but today marks the release of the Suggestions feature to all U.S. users of Messenger — Facebook’s chat app. M, which is perhaps best thought of as a Clippy that you carry around in your pocket, is unique in that it will manage to get in your way no matter what you’re trying to do.

Telling a friend you’re bouncing out of a lame party? Oh no you don’t — M thinks you should use a sticker instead. Planning a nice dinner with your partner? M is pretty sure you should take a Lyft or Uber and oh hey here are the ride options right in the middle of the screen. 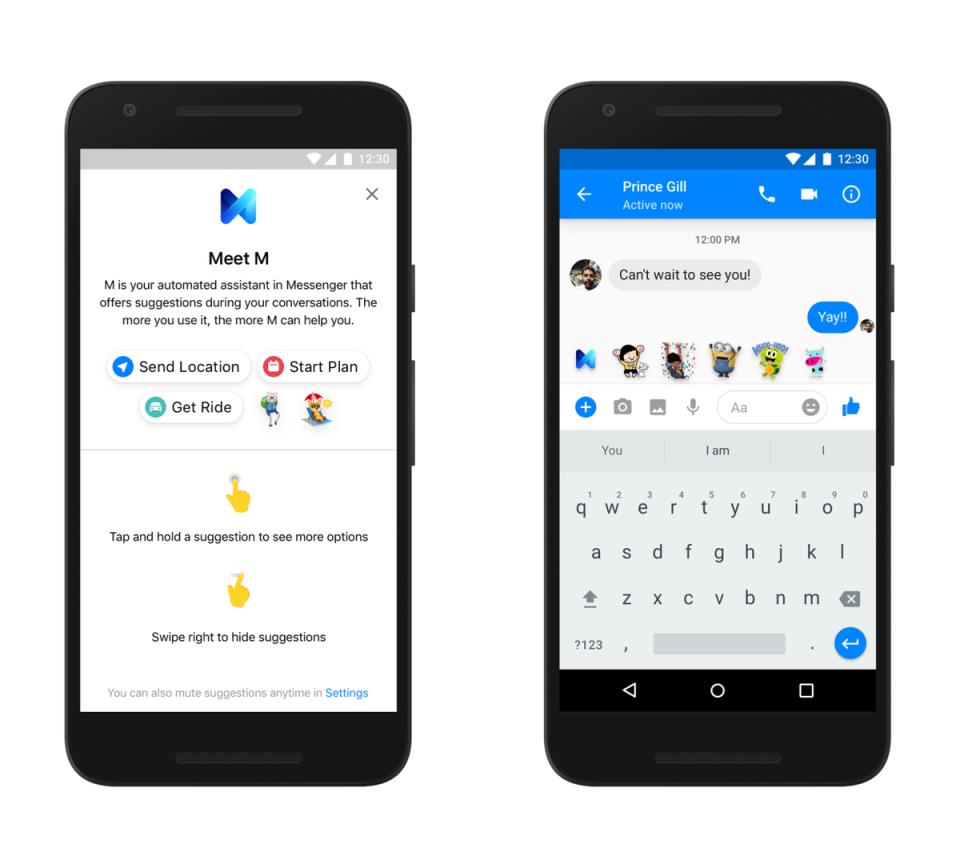 “But the more you use me, the more I can help you.”

As far as Facebook is concerned, M is more than just another pesky feature clunking up the chat interface. Rather, it’s a “helpful assistant” that demands to be experienced.

“To experience M, simply chat with a friend or a group as you normally would,” the press release continues. “And M learns: the more you use it, the more it can help.”

And while M may be able to learn and improve with more use, those looking for a Jarvis-like experience shouldn’t hold their breath. The assistant launched today is not nearly as sophisticated as the early hybrid human-AI system Facebook was testing back in 2015.

Facebook isn’t the first company to play with AI-assistants for messaging apps. Google’s Allo, which launched in 2016, included a version of Google Assistant — the digital helper also found in Google Home — that would suggest replies and help with things like translations.

For those not excited about their new artificially intelligent helper? There is an option to disable M, though we doubt very much that M will help you figure out how to do that particular task. Even if you do turn off Clippy 2.0, don’t expect this to be the last you’ll ever hear of it from Facebook.

“But this is just the beginning for M…,” the company ominously warns, “expect to see more and more AI-powered, delightful and relevant experiences improving Messenger for you, every day.”

Oh, joy. Maybe M can help us figure out how to buy a flip phone.

WATCH: Giant robot arm mounted on a truck can build a brick house in 48 hours