You might hate being forced to use Facebook Messenger — but that doesn’t mean the app is invading your privacy or part of some vast conspiracy to track all of your actions.

In the days since Facebook started requiring iPhone and Android users to download the stand-alone Facebook Messenger app to continue chatting with friends and family members, the backlash has been swift.

See also: 20 Things Your Most Annoying Friends Do on Facebook

This time, the backlash has turned into a melee over user permissions and privacy fears, thanks to incorrect reports from technical neophytes. As a result, users already upset about having to download a new app are unnecessarily freaking out over the user permissions associated with the Facebook Messenger app — primarily because the app wants permission to access your camera and microphone.

As much as that makes it sound like an NSA spying tool, the Messenger app does not do anything or ask for anything different than the regular Facebook app. It’s also not any different from any other messaging app out there. Here’s why, and what much of your Facebook feed is getting wrong:

Thanks largely to an old article in the Huffington Post and a new article from a radio station in Houston, Facebook users who are already upset about Facebook Messenger are being led to believe that the new Messenger app allows Facebook to spy on users, record all of their movements and do other insidious, nasty, things.

What’s not OK is firing up millions of users into being afraid that a messenger app is acting inappropriately because it requires access to a phone’s microphone to send voice messages.

As a Facebook rep told Mashable, nothing at all has changed in its Facebook Messenger permissions. If you installed the Facebook or Facebook Messenger app in the past, you agreed to give the app the same access that a person installing the app now would receive.

To explain further, Facebook has this web page setup to explain the app permissions requested by Facebook Messenger.

The heart of the confusion is the way Android’s app permissions work. When you install a new app from Google Play, a list of app permissions requested from the application are displayed for the user.

The permissions can look scary, especially if you read the various descriptions involved. It’s important for users to look at application permissions before installing an app, for users who are unfamiliar with the language of Android’s app permissions — or with how web services work — it can be scary.

Apple, by contrast, is able to show users more granular permissions for various permissions as they are needed. That means that when you install an app, a set number of permissions — such as Internet access — are a given. Other activity requires consent.

Google is aware of this, and the company continues to improve how app permissions are displayed.

Indeed, if you compare how Facebook Messenger’s permissions are displayed today, versus how they looked when the Huffington Post article was written, the experience is already vastly different.

Let’s look at every single permission that the Facebook Messenger app requests and explain why that request makes sense.

This is how the list looks when you install the app from Google Play as of August 11: 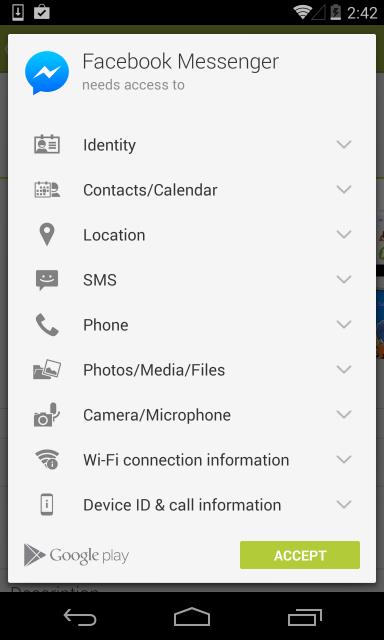 I’m grabbing all of these permissions directly from the Google Play entry for Facebook Messenger. Click on the “View details” link under Permissions in the “Additional Information” section to follow along.

If you already have Facebook installed on your phone, the messenger app can grab the account information already on your device. It can also read the contact card you have created for yourself within Android.

This will let you send a message to someone already in your address book. To do that, the app needs permission to access your contacts.

Your phone can give your location in more than one way. One way is via GPS (which you may not always have turned on), and another gives approximate location based on your network. The app needs access to your location to let you send that location to others, or list it in posts.

If you add your phone number to your Messenger account, Facebook uses an SMS message to verify that it is you. You can also send SMS and MMS messages to people who aren’t on Messenger via the Facebook Messenger app. But to do that, the app needs to be able to send and receive messages.

So you can call users directly from the app if you choose. It also means that if someone from Facebook Messenger calls you, you can know who is calling.

To help speed up the app and make things faster, the Facebook Messenger app can use part of the storage built into your phone to cache certain items and photos. That way, you don’t have to download the same photos from your friends every single time.

So you can send photos to users from within Facebook and record audio messages. Without the ability to record audio, your videos would be silent.

So that Facebook can connect to a network if you don’t have cell service (or are on a tablet). You need to be able to be online to use Facebook Messenger. That’s why it’s asking for network permissions.

So that it can help initiate outgoing voice calls.

This way the Facebook Messenger app can update itself or add features without having to require a total app-update. It also lets photos download in the background.

This lets the app run at startup, so that you don’t have to remember to load the app each time you restart. What good is a Messenger app that isn’t active when you need it?

This means that if you are using the app to take a photo or video, the app can override the sleep timer on your phone so that you don’t get locked out.

Again, this helps the app find out how it can get data.

This lets Facebook Messenger put a shortcut on your home screen.

This lets the app raise or lower the volume of of alerts.

This lets the app know if you’ve signed in, or are signed in other places.

Remember Chat Heads, the faces that pop up over other applications when you get a message?

Again, this is an absolute requirement for any messaging app.

This lets the app know about which messages you’ve read and which haven’t, so they show up the same way other places.

This lets you control the vibration for your Messenger alerts.

This lets the app move to a better network if that is available, or switch from WiFi to cellular data (and back).

None of this is new or unique

From time to time, Facebook requests more permissions from the system to perform certain tasks. Generally, the company explains why those permissions are being requested.

Nothing that Facebook is requesting for Facebook Messenger is new. If you installed the app last year, you’ve approved all of these permissions already.

We can argue about whether users should be able to approve certain permissions individually — and that’s a good discussion to have. But that is up to Google, not Facebook. When it comes to Android app permissions, Facebook has to play by Google’s rules.

Until Google has a better way of managing permissions — or takes Apple’s approach of offering specific permissions in context — the scary list is what users are left with.

But that doesn’t mean Facebook Messenger is evil, or spying on you, or tracking your every move, or indeed doing anything different from any other messaging app on the planet.

It’s not unusual to be creeped out by the amount of information Facebook, Google and other companies are collecting on their users — but this specific case doesn’t add anything to that debate.

If you’re already using Facebook, the company knows a lot about you. Having access to a few settings on your phone so that it can actually send off a text message doesn’t change that.